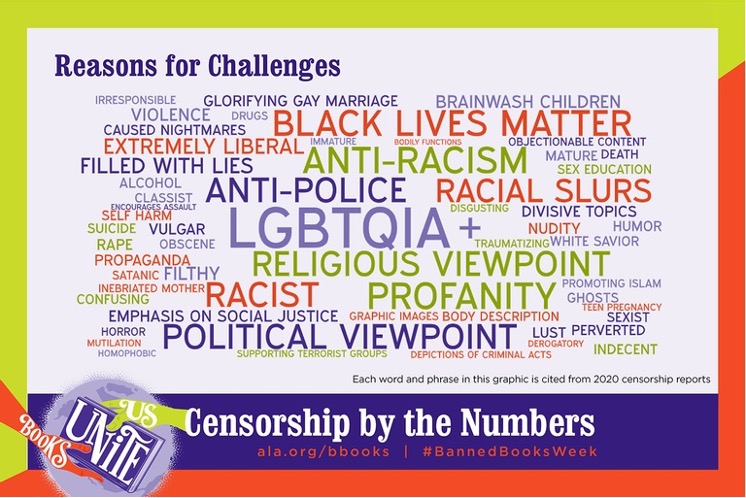 Founded in 1982 by the American Library Association (ALA) in cooperation with the Freedom to Read Foundation and National Coalition Against Censorship, Banned Books Week is an annual celebration of the freedom to read and raise awareness of current and historical attempts to censor books in libraries and schools. The Authors Guild regularly signs joint letters and statements of concern and leads or participates in other anti-censorship advocacy efforts on an ongoing basis, including a recent statement denouncing “divisive concepts” legislation, as well as the call for the U.S. to offer asylum to Afghani writers and artists who face censorship, hardship, and possible execution for their intellectual and artistic pursuits.

This year’s theme is “Books Unite Us. Censorship Divides Us.” Scheduled events include a Banned Books Trivia Night, Banned Books Virtual Quiz, Ask Jason Reynolds Anything! on Facebook Live, conversations on critical race theory and ongoing efforts by states to suppress Black thought, a lecture on how early modern Europe often banned or challenged scientific literature starting with Copernicus’ work on laws of planetary motion in 1616, and numerous discussions with censored or challenged authors such as Laurie Halse Anderson, Bryan Burroughs, and Alex Gino.

According to the ALA, the most common book challenges in the decade leading up to 2016 deemed texts to be “sexually explicit,” containing “offensive language,” or as being “unsuited for a certain age group.” Such rationale, however, almost seems quaint given the increased political polarization and mistrust among Americans. Books today are increasingly challenged for allegedly promoting religious or political viewpoints, particularly in relation to racial inequity and injustice and LGBTQIA+ inclusivity, as depicted below:

Top 10 Most Challenged Books of the Past Year

According to the ALA Office for Intellectual Freedom, here are the 10 most challenged books of the 273 targeted by parents, school board members, and community groups in the past year: