Every Week Is Banned Books Week in Azerbaijan 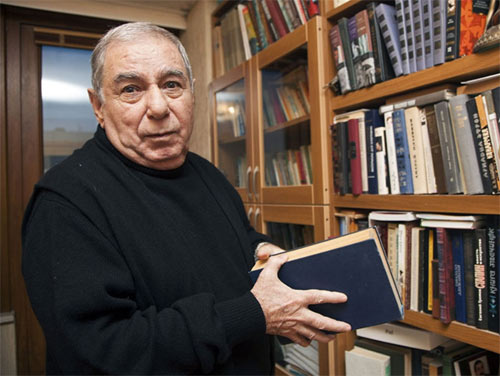 Every year during Banned Books Week (which ran from September 27 to October 3 this year), American literary organizations celebrate the “freedom to read.” The American Library Association publishes a list of the top 10 most challenged books of the year, books as diverse as George (listed as #1 in both 2019 and 2018 and included every year since 2016), The Handmaid’s Tale (2019), Thirteen Reasons Why (listed in 2017 and 2018), and the Bible (2015). All around the country, readings and literary gatherings are arranged around the Banned Books Week theme: in 2020, that theme was “Censorship is a dead end. Find your freedom to read!”

Censorship continues to be an urgent concern in American classrooms, libraries, and jails: in August 2019, it was widely reported that the acting secretary of the Kansas Department of Corrections, Jeff Zmuda, abolished a list of 7,000 books that had been kept from prisoners. But while books like Jill Twiss’s A Day in the Life of Marlon Bundo continue to face challenges here in America, the situation is far worse in countries like Azerbaijan, where censored authors aren’t recognized by major literary organizations (except in condemnation); where their books can’t be published, let alone sold; where journalists and writers are routinely hauled into court on trumped-up charges ranging from hooliganism to tax evasion; where politicians have even been known to put out a bounty on a writer’s body parts—all for doing something American writers take for granted: writing.

Consider the case of Akram Aylisli, one of Azerbaijan’s most prominent writers; his work appears in some 20 languages and has sold millions of copies worldwide. But in February 2013, Azerbaijani President Ilham Aliyev signed a decree stripping Aylisli of the title of “People’s Writer” and his presidential pension. Five days later, a pro-government party offered a bounty (later rescinded under international pressure) of nearly $13,000 for Aylisli’s ear. Aylisli’s books were burned in public bonfires, an empty coffin was paraded around his apartment building, and his family members were fired from their jobs.

Why? Aylisli wrote a novella in 2013. More precisely, a trilogy of novellas set in the volatile Caucasus region, where Azerbaijani and Armenian forces have been fighting since the late 1980s. Atrocities—including pogroms and large-scale ethnic cleansing—have been committed by both sides. Aylisli’s novella Stone Dreams depicts friendship, betrayal, ethnic cleansing, and a little-known 1919 episode of the Armenian genocide witnessed by his own mother. Although Stone Dreams has never been published in its original Azeri-language version, its publication in Russian caused an uproar in Azerbaijan and abroad. An international group of supporters nominated Aylisli for the 2014 Nobel Peace Prize for his courage in attempting to portray the nuances of the conflict and for attempting reconciliation between Armenian and Azeri peoples.

Aylisli, now 82, continues to live under de facto house arrest in Azerbaijan’s capital, Baku. New charges were filed against him in 2016 when the author, attempting to leave Azerbaijan for a writer’s conference in Venice, was accused of assaulting an airport security guard. Despite his repeated requests—and the requirements of Azerbaijani law—that his case be speedily adjudicated, there has been no real movement. Knowledgeable observers speculate that the Azerbaijani government does not want to be seen as persecuting an old man, but cannot bring itself to release him. His case has been championed by PEN America, PEN International, Human Rights Watch, and many others.

Despite the clamor over Stone Dreams, Aylisli believes that the real reason behind his continued persecution lies in a second novella, A Fantastical Traffic Jam, which has never appeared publicly in either Azeri or Russian. The book explores corruption, authoritarianism, and spiritual despair (with unexpected sprinkles of humor and magical realism) in a fictional, oil-rich country that bears more than a passing resemblance to contemporary Azerbaijan, long considered by independent observers to be one of the most corrupt and repressive regimes in the world.

So, as you browse your local bookstore’s real or virtual display of banned books this year and perhaps order a copy of The Kite Runner (the fourth most challenged book in the U.S. in 2017), spare a thought for the Akram Aylislis of the world. Chances are you may not even have heard of Aylisli, let alone the other activists, journalists, and writers in Azerbaijan of whom his experiences are unfortunately representative. If so, the repressive regime of Azerbaijan has truly won.

Photo: “Aylisli Akram” by cafoscari is licensed under CC BY-NC-SA 2.0