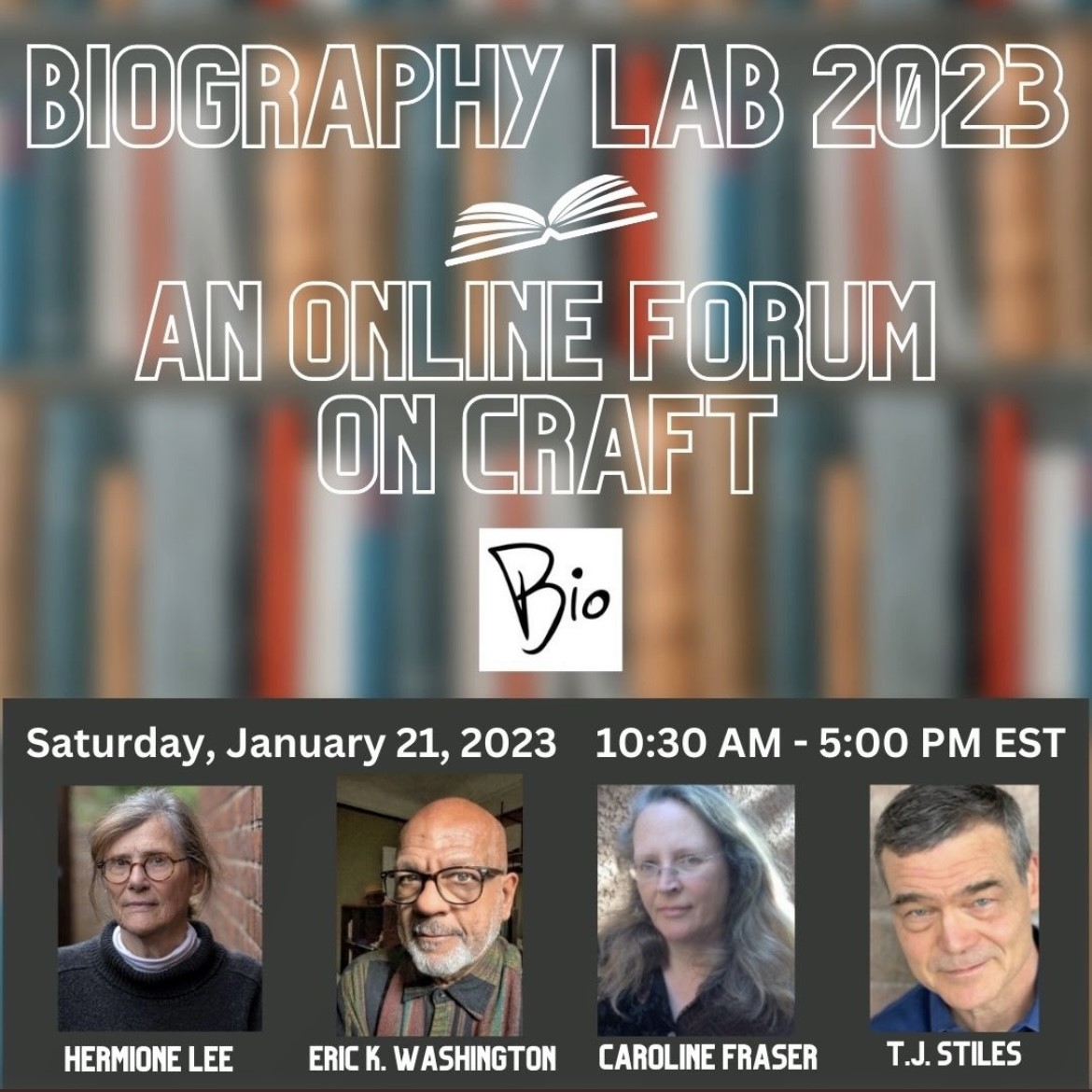 BIO is excited to announce Biography Lab, which will be held via Zoom on January 21, 2023, from 10:30 am – 5 pm U.S. Eastern Standard Time. BIO invites participants at all levels of interest and experience in the craft of biography to participate in three sequential 90-minute forums led by prize-winning biographers. A social hour concludes the day. The distinguished plenary speaker will be Hermione Lee, who will give a talk entitled “Biographical Choices.” The three widely celebrated forum leaders are Caroline Fraser, Pulitzer-Prize winner for Prairie Fires: The American Dreams of Laura Ingalls Wilder; T.J. Stiles, a double Pulitzer-Prize winner, most recently for Custer’s Trial: A Life on the Frontiers of a New America; and Eric K. Washington, winner of Herbert H. Lehman Prize for New York history for his recent Boss of the Grips: The Life of James H. Williams and the Red Caps of Grand Central Terminal.

What to Expect: Forum leaders will present on a specific issue of craft followed by questions and discussion with participants. Forums will not be recorded to protect the privacy of participants about their own works-in-progress.

Hermione Lee, “Biographical Choices,” The plenary address is prerecorded and can be viewed any time after 8:00am.

Dame Hermione Lee was President of Wolfson College from 2008 to 2017 and is Emeritus Professor of English Literature in the English Faculty at Oxford University. She is a biographer and critic whose work includes biographies of Virginia Woolf (1996), Edith Wharton (2006) and Penelope Fitzgerald (2013), and Tom Stoppard (2020). She has also written books on Elizabeth Bowen, Philip Roth, Willa Cather, an OUP Very Short Introduction to Biography, and a collection of essays on life-writing, Body Parts. She was awarded the Biographers’ Club Prize for Exceptional Contribution to Biography in 2018 and the BIO Award from Biographers International Organization in 2020. From 1998 to 2008 she was the Goldsmiths’ Professor of English Literature at Oxford. She is a Fellow of the British Academy and the Royal Society of Literature, and a Foreign Honorary Member of the American Academy of Arts and Sciences. In 2003 she was made a CBE and in 2013 she was made a Dame for services to literary scholarship. She is currently working on a biography of Anita Brookner.

Caroline Fraser is the author of Prairie Fires: The American Dreams of Laura Ingalls Wilder, which won the 2018 Pulitzer Prize for biography, the National Book Critics Circle Award, the Heartland Prize, and the BIO Plutarch Award. She served as editor of the Library of America edition of Laura Ingalls Wilder’s Little House books and has written for The New Yorker, The New York Review of Books, The Atlantic Monthly, Outside Magazine, and The London Review of Books, among other publications. She is also the author of God’s Perfect Child: Living and Dying in the Christian Science Church and Rewilding the World: Dispatches from the Conservation Revolution.

T.J. Stiles is the author of Custer’s Trials: A Life on the Frontier of a New America, winner of the 2016 Pulitzer Prize for history. He also wrote The First Tycoon: The Epic Life of Cornelius Vanderbilt, which received the 2010 Pulitzer Prize for biography and 2009 National Book Award for nonfiction, and Jesse James: Last Rebel of the Civil War, winner of the Ambassador Book Award and the Peter Seaborg Award for Civil War Scholarship. He has received a NEH Public Scholar Award, Guggenheim Fellowship, and was the first Gilder Lehrman Fellow in American History at the Cullman Center for Scholars and Writers at the New York Public Library. He served on the 2014 faculty of the World Economic Forum and currently serves on the governing boards of the Authors Guild and the Society of American Historians.

Eric K. Washington is the author of Boss of the Grips: The Life of James H. Williams and the Red Caps of Grand Central Terminal, a biography of a once influential Harlem Renaissance-era labor leader, which won the Herbert H. Lehman Prize and the GANYC Apple Award and was finalist for the Brendan Gill Prize. He was a CUNY Leon Levy Center for Biography Fellow, a Fellow-in-Residence of the Museum of Fine Arts Houston/Brown Foundation’s Dora Maar House in Ménerbes, France, and an A’Lelia Bundles Community Scholar of Columbia University from 2014 to 2017. He is a board member of the Biographers International Organization (BIO) and New York City’s Archives, Reference, and Research Advisory Board (ARRAB). His first book, Manhattanville: Old Heart of West Harlem, inspired a design project awarded the 2010 MASterworks Award from the Municipal Art Society of New York. He is the founding owner of Tagging-the-Past, a public history organization.