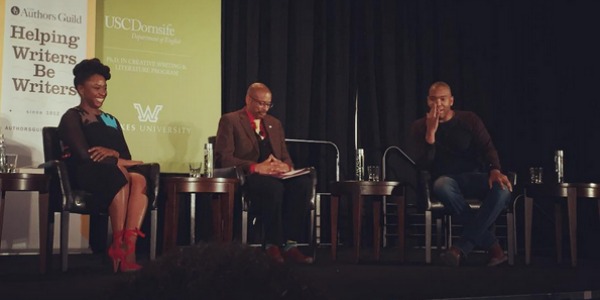 In our role as authors’ advocates who provide a support system for working writers, the Guild hosted and took part in a number of panels and events in Washington, D.C. last week at the 50th annual conference of the Association of Writers & Writing Programs (AWP). The highlight of our programming (and for many attendees, the highlight of the entire conference) was an AG-produced conversation between the authors Chimamanda Ngozi Adichie and Ta-Nehisi Coates. The event, moderated by the poet and professor E. Ethelbert Miller, drew a capacity crowd of 3,500 and was simultaneously broadcast in a spillover room for those who couldn’t fit in the main hall. Demand even dictated that the event be rebroadcast the following day. Adichie read from Americanah and Coates read new fiction. Then, led by Miller, they embarked on a candid and often deeply personal discussion of race, identity, and influence.

During the conference, Guild staff manned a booth in the conference exhibition hall and answered questions from AG members and other writers curious about our offerings and advocacy work. Each of the three conference days also featured a panel discussion organized by the Guild. On Thursday we gave a primer of copyright basics for the digital age, Friday we discussed what authors need to know about defamation law, and on Saturday we coached writers on how to position themselves for maximum rights exploitation in developing digital markets. You can listen to the recording of Saturday’s panel, Maximizing Your Value as an Author, here.

Podcasts or transcripts of the rest of the panels we produced will be available at authorsguild.org in the coming weeks.