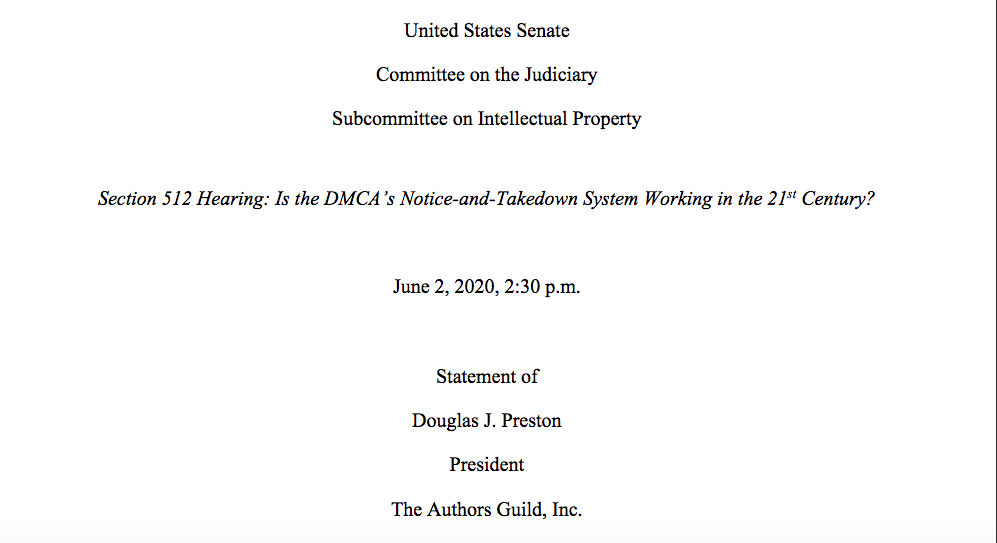 On June 2, 2020, Authors Guild President Doug Preston testified before the Senate Judiciary Committee Subcommittee of Intellectual Property hearing on the Digital Millennium Copyright Act’s notice-and-takedown system (enacted as section 512 of the Copyright Act). Titled Is the DMCA’s Notice-and-Takedown System Working in the 21st Century?, the hearing asked whether the law is working as Congress intended when it enacted the DMCA in 1998. The answer from creators? A resounding “no!”

The hearing, which began on a solemn note with an acknowledgment of George Floyd’s murder and the challenges facing the country, was conducted by IP Subcommittee Chair Senator Thom Tillis and Ranking Member Senator Chris Coons. Committee member Senator Richard Blumenthal was also in attendance. Preston was one of eight witnesses, along with Don Henley of The Eagles, independent composer Kerry Muzzey, and photographer Jeff Sedlik representing creators, and David Hansen, Jon Berroya, Abigail Rives, and Meredith Rose representing the libraries, hosting platforms, and internet users. Senator Tillis set the direction of the hearing by saying that he was most interested in understanding how the notice-and-takedown law guides the actions of creators, and the “real issues of scale” in the internet ecosystem.

Tiny David in a Sea of Tech Goliaths

Every creator who testified had one message for the lawmakers: replace or fix the notice-and-takedown law because it is simply not working for authors and creators. The witnesses described how much time and labor they spend in removing pirated copies of their content only to see it pop right back up. Calling the situation “enraging and disheartening,” Preston told lawmakers that seeing new pirated copies of his books appearing online constantly felt “like getting mugged every single day.” Muzzey said that some days he sends over a hundred takedowns to various internet platforms, referring to himself as a “tiny David in a sea of tech Goliaths.” Henley said that the “system is antiquated and badly broken. And the creative community is paying a very steep price.”

Yet, despite the creators testifying to grave conditions in their industries (Preston emphasized that full-time authors earn a median wage of $20,300 per year; and Henley mentioned that musicians get $.00069 per YouTube stream), internet industry representatives persisted in claiming that the notice-and-takedown system was working fine, trotting out the old canard that regulation of internet platforms would break the internet, which the Senators present did not find very convincing. Senator Coons rightly noted that, “Some of our most profitable companies have found success at the expense of the smallest creators.” Senator Blumenthal insisted on accountability. Senator Tillis asked why shouldn’t we “create a higher bar for targeting the amount of piracy we’re seeing?”

The Authors Guild has been advocating for years for Congress to review and amend this law and hold internet platforms that host mass piracy responsible. With the hearing and last week’s publication of the Copyright Office’s Section 512 Report, we are optimistic for change. The report—a result of the Copyright Office’s multiyear study on the current functioning of the law—makes several references to our written comments and oral statements concerning problems with the law. The three Senators present at the hearing agreed with the Copyright Office’s conclusion that the law is unbalanced and favors protecting internet services over protecting creators from infringement. The general tenor of the hearing was that it is time to rebalance the law, to put the burden of finding and targeting piracy taking place on internet platforms on the owners of those platforms instead of authors and small creative businesses. As Senator Coons pointed out: if internet companies have the technical facility to track the trillions of user-likes and views for purposes of sending users targeted ads and personalized recommendations, then we have to believe that they are capable of taking action against piracy on their platforms. We believe that this cannot be accomplished without rebalancing the DMCA and limiting the safe harbors currently enjoyed by internet services providers. Our full written statement to the IP Subcommittee contains a number of recommendations for achieving that balance.