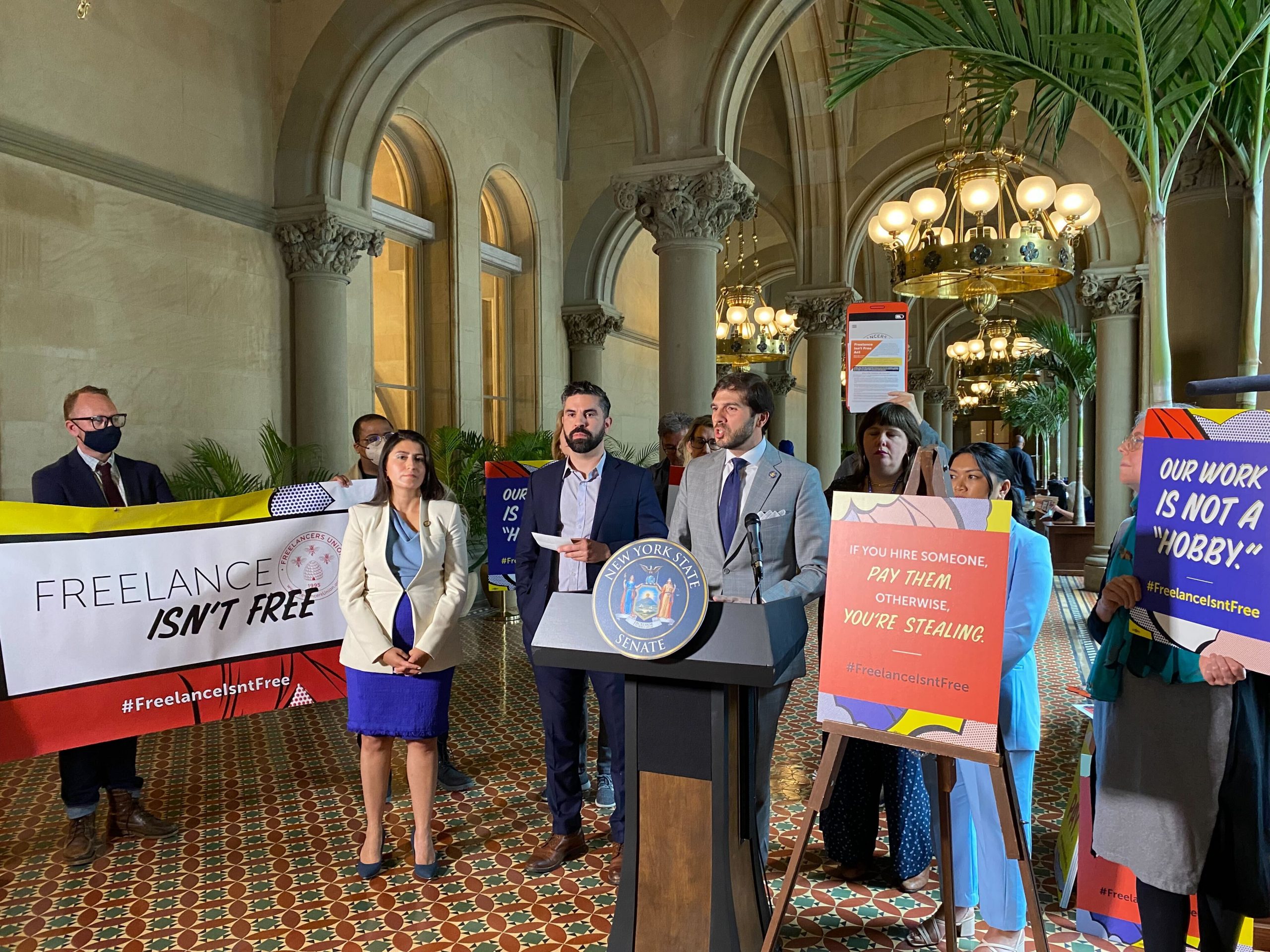 The Authors Guild joined state lawmakers and dozens of freelance workers in Albany, New York, for a lobby day to rally for the passage of the Freelance Isn’t Free Act (S8369/A9368). The bill was introduced in the New York State Assembly by State Senator Andrew Gounardes and Assemblymember Harry Bronson in February to protect the roughly 30 percent of New York state workers who engage in contract or freelance work from wage theft and overdue payments. Over a dozen more state lawmakers have since signed on as co-sponsors, with a number of others expressing support.

The lobby day included a press event with the bill’s co-sponsors, including State Senator Gounardes, Assemblymember Bronson, State Senator Jessica Ramos, and Assemblymember Emily Gallagher. Authors Guild CEO Mary Rasenberger and Authors Guild Foundation President Laura Pedersen, along with representatives from the National Writers Union, Freelancers Union, the Graphic Artists Guild, and other organizations, spoke at the event. Later in the day, they visited the offices of dozens of other NY Senators and Assemblymembers to talk about the bill’s importance. Separately, supporters of the Freelance Isn’t Free Act visited the district offices of several state legislators to generate support for the bill.

“The Authors Guild is here today on behalf of all authors and freelance writers—the original gig workers, if you may—who have always worked on a 1099 basis. Many earn less than minimum wage today and work long hours to support themselves and their families, often working multiple jobs, and to make matters worse, they often have to chase down the money they have earned,” said Rasenberger.“The Freelance Isn’t Free Act will ensure freelancers are paid as agreed and on time. It will help freelancers focus more time on their writing, instead of spending countless hours trying to recover overdue and unpaid wages, which will benefit all of us.”

The Freelance Isn’t Free Act would require that freelance workers have enforceable contracts with employers and that they are paid on time and in full. It is a statewide extension of the very successful New York City Freelance Isn’t Free Act, which since its passage in 2017 has enabled freelancers to recover $2.1 billion in unpaid wages and convinced many more employers to pay rather than face claims. The New York State law would also make enforcement more robust by empowering the New York State Department of Labor to take action against hiring entities that violate the law, including by recovering double damages on behalf of affected freelance workers for violations.

If you are an author, freelance journalist, or other freelance worker based in New York state, we urge you to contact your representative to voice your support for #FreelanceIsntFree.