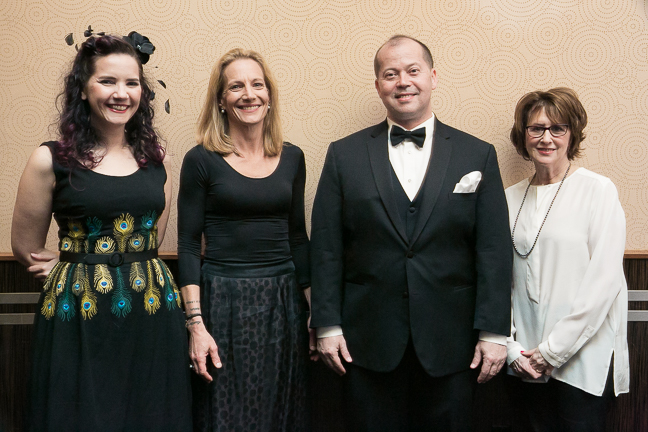 On April 27, 2015, the Authors Guild held its annual celebration of writers and writing at the Edison Ballroom in New York City. At the dinner event, hosted by One Story Editor-in-Chief Hannah Tinti, the Guild honored Joan Didion with its Award for Distinguished Service to the Literary Community. In remarks delivered before presenting the award, Guild President Roxana Robinson praised the “unwavering gaze” of Didion, “one of the great American writers.” See below to read Robinson’s speech honoring Didion.

The evening’s entertainment—presented by the House of SpeakEasy—featured Alexander Chee, Kathryn Harrison, and Delia Ephron responding to Didion’s classic declaration, “Why I Write.”

Each guest received—courtesy of Literary Hub—a canvas tote emblazoned with a photo of a young Didion.

The Authors Guild Dinner, held annually since 1993, benefits the Authors Guild Foundation, which promotes the role of copyright and free speech in maintaining a vibrant literary culture, and the Authors League Fund, which has provided vital financial support to book authors and dramatists in need for more than 90 years.

Many thanks to all who offered their support to these organizations.

Joan Didion, recipient of the Authors Guild Award for service to literature.

There are certain moments that brand themselves into our consciousness, moments that stand as intersections between our public and private lives. These create a tremor that runs through the entire country.

Joan Didion’s writing is like this, so electrifying, so powerful, that for writers it’s like a national event. Just as people remember exactly where they were when men landed on the moon, writers remember the first time they read The White Album. Or the great essay, “Why I Write.” Or entered the bare, beautiful and lunar landscape of her novel, Play it as it Lays. Passages in Didion’s work have become burned into our consciousness.

Some of these moments are odd and personal: the image of someone waiting in an airport, or sitting on the floor at a party, smoking a cigarette, navigating a difficult lane-shift on a California highway, seeing a minor actress cross the lobby at a hotel in Las Vegas. Often the moments are quiet, without drama, but they have a troubling and breathtaking clarity. Even if we can’t quite articulate the message, we understand that they encapsulate something central about life in the twentieth century.

Didion was curious about that subject, the American twentieth century, which seemed to her to reveal the stately march into oblivion of the American dream. She turned her own level gaze upon that image, the end of the dream. In many ways she has been our collective conscience, raising the issues of covert wars, racism, political opportunism, and examining them with an unwavering gaze.

One interviewer mentioned Didion’s “harsh Protestant ethic:” and it’s an essential part of her point of view. This harshness is revealed in this sentence from Play it as It Lays: “Maria did not particularly believe in rewards, only in punishments, swift and personal.” (73) There is the bleak Puritanical world, one that offers no solace or comfort, only the danger of the dark blade.

In some ways Didion is pitiless, but she is pitiless first toward herself. In her famous essay, “Self-Respect,” she writes about a Puritan virtue, a grounding that arises from honesty and responsibility, courage, a sense of duty. Those old-fashioned Yankee character traits are essential to this writer who grew up Southern Californian, who wears sunglasses and drives a Corvette and writes about alcoholism and drugs and adultery. She writes about those things, but she does not embrace them.

She said, famously, that writing was a hostile act, that in it you challenged the reader’s beliefs and assumptions. It’s true that we may find our comforting beliefs shaken, or mocked. But her gaze holds more than criticsm; it also holds compassion.

In her writing there is always a struggle between the two visions of the dream. There is the brave sunrise and the fresh wind moving over the long green fields, and there is also the woman sitting alone at the bus station, a silk scarf tied over her dirty blond hair. Didion saw both parts of that vision. It was her deep feelings for the dream itself, with its golden radiance, as well as for the sad details of its ending, that makes her writing so irresistible, so profoundly moving.

“As it happened,” she writes in “John Wayne, a Love Song,” “I did not grow up to become the kind of woman who is the heroine in a Western, and although the men I have known have had many virtues, and have taken me to live in many places I have come to love, they have never been John Wayne, and they have never taken me to that bend in the river where the cottonwoods grow. Deep in that part of my heart where the artificial rain falls forever, that is still the line I wait for.” (30)

It is impossible to imagine Joan Didion as the heroine of a John Wayne Western, but she is able to persuade us of some magical appeal in it. Though she reminds us that the rain in those movies is artificial, at the same time she invokes a deep yearning for that bend in the river, and the cottonwoods. It’s her ability to hold these two notions in her head at once, and to make them so vivid, that makes her one the great American writers.