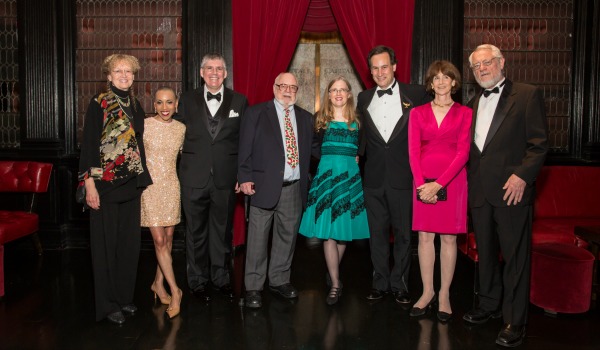 There are some good books that are only for adults, because their comprehension presupposes adult experiences, but there are no good books which are only for children. —W.H. Auden

At our annual benefit dinner Wednesday night, the Authors Guild presented the 2016 Award for Distinguished Service to the Literary Community to Suzanne Collins, author of The Hunger Games trilogy and The Underland Chronicles series. Collins was honored for exemplifying the unique power of young people’s literature to change lives and to create lifelong book lovers. It was the first time the Guild presented its annual award to a YA author.

David Levithan, author of Boy Meets Boy, introduced Collins, addressing critics of the violence in her work. “Children dying in books is not a problem,” he said. “Children dying in real life is a problem. That is why we need the truth tellers who are also storytellers and the storytellers who are also truth tellers.” After accepting the award, Collins herself revealed her impetus for dealing frankly with violence in her work. “I write for kids because . . . I think the concepts of war—the realities, the politics, the ethical ambiguities—are introduced too late to children. These stories are written with the hope that if the whole idea of war were presented to people at an earlier age, we would have better dialogues going on about it.”

Collins was followed by three distinguished authors of books for young readers—Norton Juster, Rick Riordan, and Andrea Davis Pinkney—speaking on why they write for the young.

Juster, author of The Phantom Tollbooth, spoke of what compelled him to write for the young while pursuing a career as an architect: “Most of our children are very seriously underestimated in what they can understand and what they feel like and how they connect with us.”

Riordan, best known for the Percy Jackson and the Olympians series, got to the essence of why writing for young people matters: it reaches readers in the midst of their human development. “Why is writing for kids important?” he asked. “I don’t have to look very far to see the reason. In this room, there are a lot of people who have shaped my life and the lives of my children.”

Pinkney, author of over 20 books and winner of a Coretta Scott King Award, offered a paean to the power of books to reach those who may need them most: the young, the marginalized, those who feel invisible among us.

The Authors Guild Dinner, held annually since 1993, benefits the Authors Guild Foundation, which conducts advocacy and education to support and protect the profession of writing and welfare of writers everywhere, and the Authors League Fund, which has provided vital financial support to book authors and dramatists in need for almost 100 years. Sidney Offit served as president of the Foundation for more than 20 years. At the Dinner the Guild honored him for his service and presented him with a custom-bound volume of reminiscences from his friends and colleagues. The Guild also paid tribute to former Executive Director, Paul Aiken, who passed away in January after a courageous battle with ALS.

Many thanks to all who offered their support.