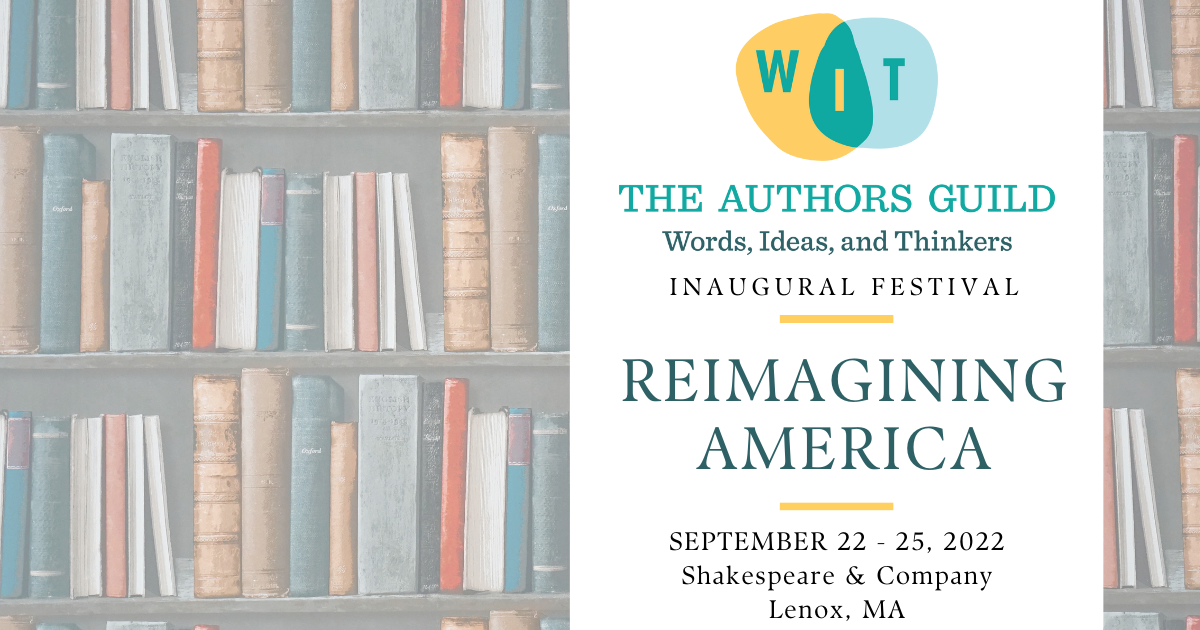 Thanks to the generosity of sponsors and Authors Guild Foundation Giving Society donors, the festival was free to all. Registration for the WIT Festival and all seven sessions filled up more than a month before the event.

Centered around the theme of “Reimagining America,” seven sessions explored the relationship between science and religion, the United States’ relationship with China, America through fiction, American history, climate change, the future of the U.S. Supreme Court, and identity and belonging.

“Audience members were so enthralled by the discussions and the presenters’ insights that many people were asking us to let the sessions go longer so the conversations could continue,” said Lynn Boulger, executive director of the Authors Guild Foundation, which organized and raised money for the event. “Given all that is happening in the U.S. and the world today, and the fact that most people haven’t had the opportunity to attend live literary events for more than two years because of the pandemic, it was clear that our audience hungered for intelligent discourse.”

Three exciting pop-up events also took place during the festival, including a standing-room-only discussion about the role and meaning of shame in Letty Cottin Pogrebin’s memoir Shanda; a live performance of Dan Brown’s Wild Symphony with the author and the Pioneer Valley Symphony Orchestra; and the one-act comedy Community Service by playwright and author Laura Pedersen.

“We want to thank all of our speakers and moderators, Authors Guild Council members, board members, staff, and the entire team at Shakespeare & Company, who dedicated long hours to make the inaugural WIT Festival a success,” said Authors Guild CEO Mary Rasenberger. “We also express our deep gratitude to our media partners, the Berkshire Eagle and Berkshire Magazine, which spent months writing about and promoting the event; The Bookstore in Lenox for managing the book sales and signings; and the many people and businesses of the Berkshires who so warmly embraced the Authors Guild and the WIT Festival. We are so proud to join the community.”

The Authors Guild is already beginning to plan for next year’s WIT Festival, to be held September 21–23, 2023. To learn more about this year’s festival and next year’s lineup, please visit authorsguild.org/wit-festival.

You can also read more about the literary and intellectual importance of the festival to the Berkshires and Western Massachusetts community in the recent Berkshire Eagle editorial, “The Soul of WIT.”

With more than 12,000 members, the Authors Guild is the nation’s oldest and largest professional organization for published writers. It advocates on behalf of working writers to protect free speech, freedom of expression and authors’ copyrights; fights for fair contracts and authors’ ability to earn a livable wage; and provides a welcoming community for writers and translators of fiction, nonfiction, poetry and journalism. Free programming to teach working writers about the business of writing and public events that highlight the importance of a rich, diverse American literary culture and the authors that contribute to it is made possible through the Authors Guild Foundation, the Guild’s educational and charitable arm.