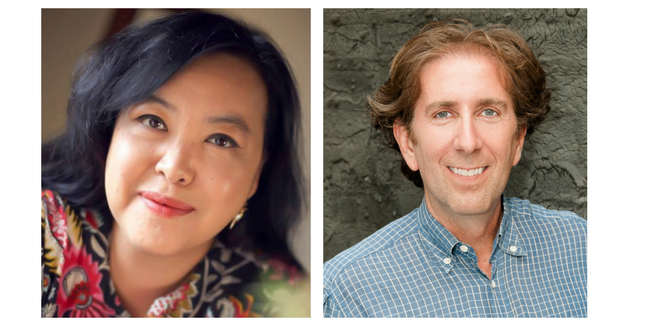 Monique Truong, the Vietnamese-American author of two award-winning novels, was elected as vice president of the Authors Guild, and the journalist and biographer D.T. Max was chosen to join the Guild’s governing Council. The elections took place at the organization’s annual meeting March 1, 2018 at Scandinavia House in New York City.

“Monique has been a strong and passionate voice on behalf of authors and authorship,” said James Gleick, the Guild’s president. “Her view of the world is as wise and wide-ranging as you’d expect from reading her fiction.” She joins the novelist Richard Russo, vice president, along with Peter Petre, treasurer, and Daniel Okrent, secretary.

Truong’s work includes the best-selling novel The Book of Salt (Houghton Mifflin, 2003) and Bitter in the Mouth (Random House, 2010. Her essays have appeared in O Magazine, Real Simple, Marie Claire, The Washington Post, The New York Times, and T magazine. Her accolades include residencies at the Lannan Foundation, Yaddo, MacDowell Colony, Ucross Foundation, and a Guggenheim Fellowship. Truong was born in the former Saigon, now Ho Chi Minh City, and came to the United States as a refugee in 1975. She has been a member of the Authors Guild Board for the last 7 years.

D.T. Max is a staff writer at The New Yorker. His book, Every Love Story Is a Ghost Story: A Life of David Foster Wallace, published in 2012, was a New York Times bestseller. He is also the author of The Family That Couldn’t Sleep: A Medical Mystery and was a Guggenheim Fellow and a Leon Levy Center Biography Fellow. Max has written for The New York Times, New York Magazine, The New Republic, and many other publications. He has been a member of the Authors Guild since 1992.

About the Authors Guild:

The Authors Guild has served as the collective voice of American

authors since its beginnings in 1912. Its over 10,000 members include novelists, historians, journalists, and poets—traditionally and independently published—as well as literary agents and representatives of writers’ estates. The Guild is dedicated to creating a community for authors while advocating for them on issues of copyright, fair contracts, free speech, and tax fairness. Please visit www.authorsguild.org.