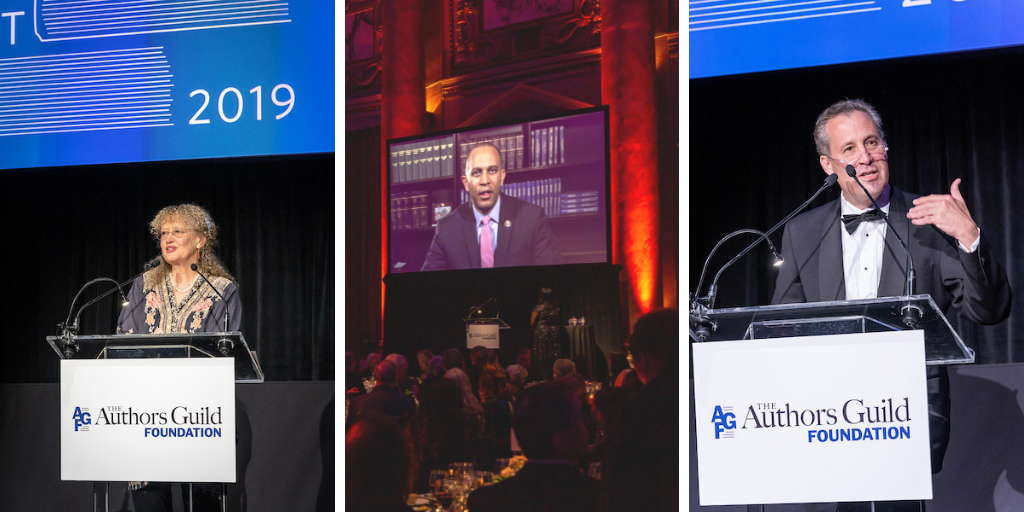 New York (May 17, 2019): The Authors Guild Foundation, the charitable and educational arm of the Authors Guild, the largest and oldest non-profit organization for professional writers in the United States, honored three luminaries for their ongoing contributions and support of the literary community at its 27th Annual Benefit on Wednesday, May 15 at the historic Beaux-Arts restaurant and ballroom Capitale in New York City.

“Each of these hard-working and highly successful professionals has made and will continue to make enormous contributions to the rich intellectual culture of New York and to the U.S. literary community as a whole,” said Mary Rasenberger, Executive Director of the Authors Guild. “Through their efforts, these three honorees exemplify the mission of the Authors Guild and the Authors Guild Foundation to advance the rights of today’s writers and foster an ongoing commitment to the artistic and educational benefits that a vibrant American literary culture offers. We are immensely proud to have recognized their contributions at our 2019 Foundation Benefit and Gala.”

Mary Pope Osborne is the author of more than 100 children’s books, including novels, picture books, biographies and retellings of mythology and folktales. She is best known for the Magic Tree House series, which has sold more than 134 million books worldwide and has been translated into 33 languages. Widely regarded by parents, teachers and librarians for her ability to instill a passion for reading, Osborne works closely with educational collaborators, nonprofit organizations and schools to develop curriculum for elementary school students using the Magic Tree House books as a starting point for learning. A former president of the Authors Guild, she currently serves on its Council and is a strong advocate for copyright protection, fair publishing contracts and freedom of expression. Osborne has traveled extensively in the U.S. and abroad, speaking about the need to get books in the hands of underserved children.

Tony Marx heads The New York Public Library, the nation’s largest library system, with 88 neighborhood libraries and four scholarly research centers. Since joining the NYPL in 2011, Marx has strengthened the NYPL’s role as an essential provider of educational resources and opportunities for all ages. Under his leadership, the NYPL has created new early literacy and after- school programs for children and teens, dramatically increased free English language classes and citizenship support for immigrants and improved services for scholars and students who rely on the Library’s world-renowned research collections. Under Marx, the NYPL has also become a national leader on bridging the digital divide through its efforts to increase access to e-books, expand computer classes and coding training and a groundbreaking program that provides home internet access to families of low-income students. Previously Marx served as President of Amherst College from 2003 to 2011, during which time he tripled enrollment for low-income students, and as a political science professor and director of undergraduate studies at Columbia University. Marx holds a BA from Yale University, an MPA and PhD from Princeton University.

Born and raised in Brooklyn, Rep. Hakeem S. Jeffries serves as a member of the House Judiciary Committee, House Budget Committee and Chair of the House Democratic Caucus. A passionate advocate for the rights of artists, Rep. Jeffries played a key role in the House’s passage of the historic 2018 Music Modernization Act (MMA). Heralded as a sweeping update to our copyright laws, the MMA improves the licensing process so that songwriters, authors and visual artists can continue to share their creativity with the world and are more likely to get paid a fair price for their work. Earlier this month, Jeffries co-sponsored and introduced the Copyright Alternative in Small-Claims Enforcement (CASE) Act. This bipartisan legislation establishes the Copyright Claims Board at the Copyright Office to make it easier and less expensive for independent creators, including book authors, to better defend their intellectual property from piracy and other copyright theft. Jeffries holds a BA in political science from SUNY Binghamton, a MA in public policy from Georgetown University and earned his JD from New York University School of Law.

Authors Guild Foundation Board Vice President Laura Pedersen served as Masters of Ceremonies at the black-tie benefit, while entertainment was provided by some of New York’s most well-known and admired authors, including Scott Turow, Rachel Vail and Meg Wolitzer.

Proceeds from the event will be used to develop low-cost or free educational programming to support and advance the ability of today’s working writers to earn a sustainable living and ensure the importance and continued growth of American literature.