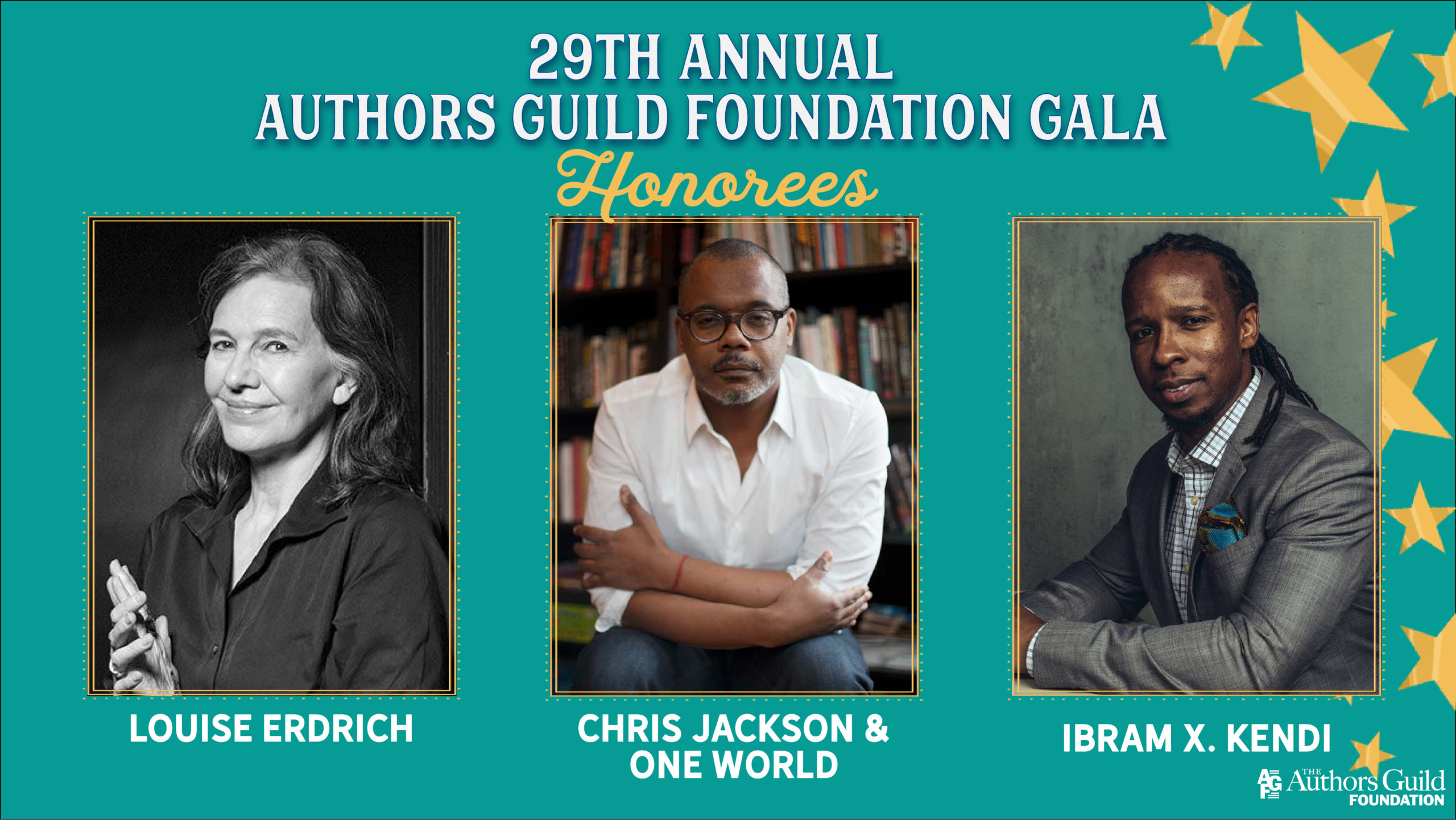 New York (April 20, 2021): The Authors Guild Foundation, the charitable and educational arm of the Authors Guild, the largest and oldest non-profit organization for professional writers in the United States, will be honoring Louise Erdrich with the Distinguished Service to the Literary Community Award at its 29th Annual Gala. It also will honor Ibram X. Kendi with the Literature That Inspires Change Author Award and One World publisher and editor-in-chief Chris Jackson with the Literature That Inspires Change Publisher Award. The virtual gala will be streamed on Tuesday, May 18th beginning at 7 pm EST and is free to the public.

“Given the tumultuous past year, the theme of this year’s gala is Books That Inspire Change. From journalism that has laid bare the impact of the pandemic and helped elevate the Black Lives Matter movement, to fiction that illuminates the complexities of our society and our history and nonfiction works that provide new perspectives on anti-racism, equity, and justice, American authors like Louise Erdrich and Ibram X. Kendi guide a struggling nation with their words,” said Mary Rasenberger, CEO of the Authors Guild and Authors Guild Foundation. “At the same time, cutting edge publishers like Chris Jackson and the One World imprint introduce us to, and publish works by, writers who serve as effective agents of change, offering us the insight and perspective to help understand one another and upholding our democratic values with integrity and courage.”

Louise Erdrich (Distinguished Service to the Literary Community Award) has authored 17 novels as well as volumes of poetry, children’s books, short stories, and a memoir of early motherhood. Her novel The Round House won the National Book Award for Fiction. The Plague of Doves won the Anisfield-Wolf Book Award and was a finalist for the Pulitzer Prize, and her debut novel, Love Medicine, was the winner of the National Book Critics Circle Award. Erdrich has received the Library of Congress Prize in American Fiction, the prestigious PEN/Saul Bellow Award for Achievement in American Fiction, and the Dayton Literary Peace Prize. She lives in Minnesota with her daughters and owns Birchbark Books, a small independent bookstore focused on Native arts and culture.

Ibram X. Kendi (Literature That Inspires Change Author Award) recently was named to Time’s “100 Most Influential People in the World.” A noted historian and leading antiracist scholar, Kendi is the Andrew W. Mellon Professor in the Humanities and the Founding Director of the Boston University Center for Antiracist Research. The author of seven books, four of which became #1 New York Times bestsellers, he won the 2016 National Book Award for Nonfiction for Stamped from the Beginning: The Definitive History of Racist Ideas in America, making him the youngest winner in the nonfiction category. Other published works include The Black Campus Movement, which won the W.E.B. Du Bois Book Prize; Antiracist Baby; Stamped: Racism, Antiracism, and You, co-authored with Jason Reynolds; Four Hundred Souls: A Community History of African America, 1619-2019, co-edited with Keisha N. Blain; and the international bestseller How to Be an Antiracist, which the New York Times described as “the most courageous book to date on the problem of race in the Western mind.”

Chris Jackson/One World Publishing (Literature That Inspires Change Publisher Award) is the publisher and editor-in-chief of One World, the newly relaunched imprint of Random House, that provides a home for authors, journalists, thinkers, activists, and creative artists unconstrained by genre who seek to challenge the status quo, subvert dominant narratives, and give us new language to understand our past, present, and future. He’s the editor of a wide range of award-winning and bestselling authors, including Bryan Stevenson, Ta-Nehisi Coates, Jill Leovy, Trevor Noah, Nikole Hannah-Jones, Ibram X. Kendi, Valarie Kaur and Eddie Huang. Jackson’s own writing has appeared in The Paris Review, Callalloo, The Atlantic.com and other outlets.

“Thanks to the generous support of donors, attendance to our virtual gala is free, but we encourage everyone who believes in the transformational power of books and supports the mission of the Authors Guild and the Authors Guild Foundation to make a contribution,” said Laura Pedersen, President of the Authors Guild Foundation.“This past year, for example, the Foundation underwrote efforts to advocate with Washington lawmakers to ensure that freelance writers are eligible for COVID-19 unemployment assistance and creating a program for Black children’s authors to connect with the gatekeepers of the publishing industry.”

Pre-registration is required. To register or make a donation, visit https://www.authorsguild.org/who-we-are/authors-guild-gala/