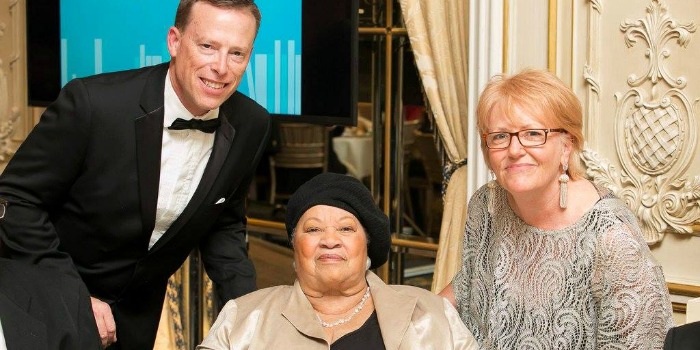 On May 24 in New York City the Authors Guild hosted its 25th annual benefit dinner, where we honored Toni Morrison, James Patterson, and the publishing company IngramSpark with awards for Distinguished Service to the Literary Community. The recipients of the Award were honored for their contributions to the rich literary world we live in and the multiple means by which authors reach readers. The dinner, held annually since 1993, benefits the Authors Guild Foundation, which conducts advocacy and education to support and protect the profession of writing and the welfare of writers everywhere.

Serving as Master of Ceremonies, NPR host Jami Floyd began the program by reminding the audience—which filled a ballroom at New York City’s Essex House hotel—of the importance of writers in our society and the work the Authors Guild does on their behalf. The Guild’s newly inducted president, James Gleick, then welcomed the crowd, surmising that “we all know books are going to be all right—sort of” before handing it over to AG council member CJ Lyons, who presented the Award to IngramSpark.

In presenting the award, Lyons, a bestselling indie author who has herself used Ingram’s self-publishing services, cited the company’s focus on serving authors and “getting books into the hands of excited readers.” The award was accepted by Robin Cutler, Director of IngramSpark, and Kelly Gallagher, Vice President of Content Acquisition.

Morrison’s award was presented by her longtime editor Robert Gottlieb—an author in his own right—who offered that Morrison has “made an indelible impression on everyone who has been writing in the last 40 years.” Morrison took the stage to a standing ovation. After accepting the award, she recalled her and Gottlieb’s trenchant but good-natured struggles over comma placement, and spoke of the importance of the Guild’s work providing community for authors. “The truth is, an author’s work is not merely competitive,” she said. “As strong as competition is, it is not nearly as strong or as needed as community.”

After dinner, Authors Guild executive director Mary Rasenberger and author Nick Taylor, president of the Foundation, took the stage to underscore the importance of authors to society, to describe the work of the Foundation, and to rally support for the Foundation’s Free Expression Fund. “It has been said that poverty is the worst form of censorship,” said Rasenberger, explaining the Fund’s purpose. “When they can’t make ends meet, authors write less or not at all. That’s why the Foundation supports the Guild in its advocacy for copyright protection, fair contracts, and free speech; and it is why the Foundation educates authors to empower them in the business of writing.”

Rasenberger and Taylor then led the audience in a parlor game. Taylor recited the first line of a novel, and guests were invited to shout out the title and author of the novel. The books included Morrison’s Beloved, Sherman Alexie’s The Absolutely True Diary of a Part-Time Indian, and Alice Walker’s The Color Purple; when the game was done, Rasenberger revealed one thing they all have in common: they were banned somewhere in the U.S. within the last year.

After Rasenberger and Taylor called for donations to the Free Expression Fund, lawyer and agent Robert Barnett presented the evening’s final award to James Patterson, citing Patterson’s extreme generosity to literary causes, robust work ethic, and commitment to improving literacy. Patterson proceeded to charm the evening’s guests, mocking his own reputation as a prose factory, portraying his descent to the dungeon where he keeps his stable of writers—“my own personal authors’ guild”—under lock and key: “Wakey wakey my minions! Novel a week, novel a week!”

With our organizations’ income from overseas licensing fees down significantly, events like this now play an outsize role in the Guild’s fiscal health. Many thanks to all who offered their support.