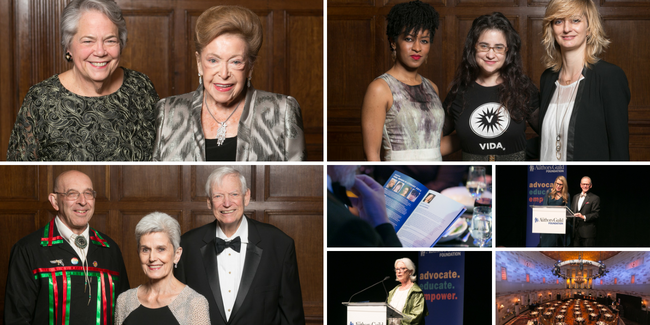 Women authors and independent, mission-driven publishing were honored at this year’s Authors Guild Foundation’s Annual Benefit. The black-tie gala, held at the elegant Gotham Hall on May 16, celebrated bestselling suspense novelist Mary Higgins Clark, the Colorado independent publisher Fulcrum Publishing (and its owners Charlotte and Robert C. Baron), and the feminist literary advocacy organization VIDA: Women in Literary Arts by presenting them with Distinguished Service to the Literary Community awards. 325 authors and publishing professionals attended the event, making it the Foundation’s largest gala since its inception in 1993. It was a fun, lively evening among new and old friends, unique in its focus on authors and those who support them.

If you’re here, it’s because you also feel yourself to be part of a community. We know this is paradoxical. Authorship is a solitary business, always coming down to a writer and a blank page, but inevitably it becomes a social act as well, because the book is inextricably part of the world, it finds readers, it begins a conversation, it tells a kind of truth that can’t be told in any other way—or else it fails to do that.

So when they look up, authors know that authorship is a social calling after all. We have colleagues, we have mentors. We have responsibilities. The writing life isn’t a thing to be taken for granted. It needs protection, it needs nurturing. That’s what the Authors Guild is for, and the need is as urgent now as it has ever been.

Tony and Emmy Award-winning actress and author Jane Alexander was the Mistress of Ceremonies. She opened with an anecdote about her time as Chair of the National Endowment for the Arts when the NEA was—as it is today—at risk of being defunded. Alexander was told she could improve its chances of survival by cutting all grants to individuals. Refusing to accept this, Alexander sent a book of collected writings to the wife of a prominent politician who greatly enjoyed them. At the same time, the Authors Guild was lobbying Congress to to keep the individual NEA grants for writers. As a result of these efforts, the grants for individual writers were saved.

Native American author Joseph Bruchac presented the award to Charlotte and Robert Baron, the owners of indie publisher Fulcrum Publishing. Bruchac praised Fulcrum and the Barons for promoting new and diverse voices such as his own, and Charlotte Baron said she was “proud of the sacrifices and work we have done to share the messages of our authors with the world. We have put their messages above our business.” Robert Baron spoke about the powerful connection books can make: “They are written by one person and generally read by one person. That linkage of one individual to another over space and time is unique.”

The next honoree was Mary Higgins Clark, the author of 51 bestselling books. Carolyn Reidy, the CEO of Simon & Schuster, Clark’s longtime publisher, presented the award. Clark took the stage to a standing ovation and related humorous stories about the many rejections she received before her books caught on and how she’d been blessed by the “storytelling fairy” at birth (although she lamented that the “fairy of beautiful voices” was out of town). Clark said that although many attempts have been made to woo her away from Simon & Schuster, but she believes, like the country girl asked to dance by another man, “No thanks, I prefer to dance with the one who brought me.”

After dinner, Authors Guild executive director Mary Rasenberger and Foundation president and author Nick Taylor went to the podium to describe the work of the Foundation. Rasenberger and Taylor led the audience in a parlor game where they mentioned the day jobs of various authors (and Authors Guild members), ranging from chicken ranch worker to Saab dealer, and challenged the audience to guess the identity of the author. Rasenberger and Taylor ended by rallying support for the Foundation’s upcoming Boot Camps that will travel to underserved communities around the country and provide intensive workshops to equip emerging writers with the skills they need to thrive professionally. The Boot Camps will foster new diverse voices by reaching talented early-career authors who do not have ready access to a supportive literary community or the tools and knowledge to succeed as writers. Rasenberger announced that the Foundation won its first-ever NEA grant this year for the program and that Penguin Random House had signed on as the exclusive publisher partner. Rasenberger ended with an announcement of the online auction to run through June 6 and a big thanks the Gala’s supporters.

Former Guild President Roxana Robinson presented the final award of the evening to VIDA: Women in Literary Arts. Amy King, Lynn Melnick, and Camille Rankine accepted on behalf of the organization. Rankine spoke about VIDA’s commitment to providing a platform for the voices of marginalized communities within the literary community and beyond. “It is essential that we make space for a multiplicity of voices to be heard within its realm—especially when there are many voices in our culture that we too often fail to recognize as valid, and too many whose humanity we fail to comprehend.”

It is the goal of the AGF to also enable those voices to be heard, and the new Boot Camps launching this year are designed to help bring that goal to fruition. The Guild is grateful to the Gala’s supporters, who, through their generosity, are actively enriching the American literary landscape.