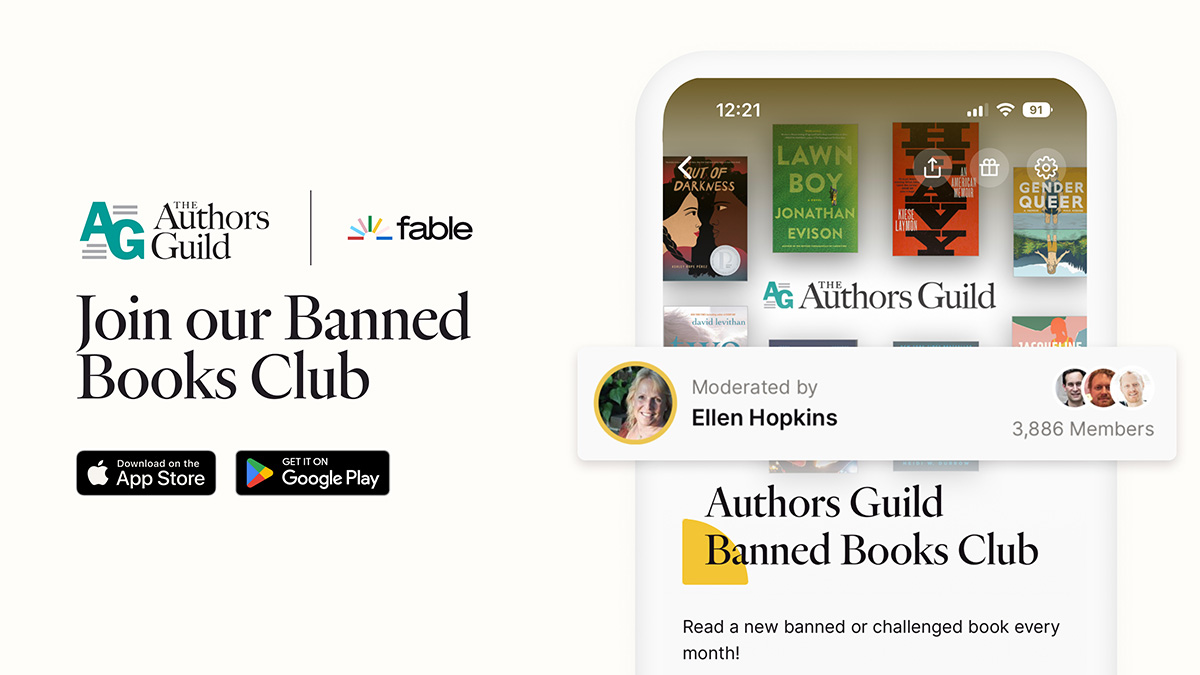 November 17, 2022 (New York): The Authors Guild Banned Books Club is pleased to announce its next three featured titles. Hosted on the social reading app Fable, the Banned Books Club showcases contemporary and classic award-winning novels and memoirs currently banned in one or more school districts in the United States. The discussion of each book is led by its author or, if the author is deceased, by someone with a special affinity for the work.

The upcoming titles are:

Thousands of readers from around the country have joined the Authors Guild Banned Books Club since it launched in April. Anyone interested can join the book club on Fable for free and access the moderated book discussion and other valuable resources at any time.

“We are thrilled by the response to our Banned Books Club since we launched it earlier this year,” said Authors Guild CEO Mary Rasenberger. “These books ask us to consider deep questions of identity and belonging, which is precisely why access to them is so imperative. We’re excited to reveal the next quarter’s selections and look forward to reading or re-reading them with our book club members.”

Please visit authorsguild.org/bannedbooksclub for more information or to join now. The Authors Guild Banned Books Club is made possible in part by a generous grant from Hachette.

Isabel Wilkerson’s nonfiction work Caste examines the invisible yet profoundly impactful “human hierarchy” that determines which groups of people have power and which do not. Wilkerson compares American society to caste systems in India and Nazi Germany before suggesting ways that America might achieve a more just and common humanity. An Oprah’s Book Club selection, Caste has received starred reviews from Kirkus Book Reviews, Publishers Weekly, Library Journal, and Booklist, and has won numerous literary awards, including the #1 New York Times Bestseller, the #1 Nonfiction Book of the Year by Time, and the Los Angeles Times Book Prize. The book has been banned for its alleged potential to cause students guilt, anguish, or psychological distress at the suggestion that they themselves might be consciously or unconsciously racist or oppressive.

The Girl Who Fell from the Sky by Heidi W. Durrow

Heidi Durrow’s The Girl Who Fell from the Sky is about a young biracial girl who, after a family tragedy, is forced to move to a new city to live with her strict African American grandmother. Finding herself for the first time in a predominantly Black community, the blue-eyed main character struggles to navigate her grief and the societal notions of race and class. The book, which won the PEN/Bellwether Prize for best fiction manuscript addressing issues of social justice, has been targeted for its sexual content and depictions of rape.

Out of Darkness by Ashley Hope Perez

One of the most banned books in the country, Ashley Hope Perez’s Out of Darkness tells a love story between a Mexican American girl and an African American boy, set against the backdrop of a segregated oil town where a real-life gas explosion killed hundreds. While the book contains themes of race and class, it has been banned in nearly two dozen school districts for its depictions of sexual intimacy and assault.

With more than 12,000 members, the Authors Guild is the nation’s oldest and largest professional organization for published writers. It advocates on behalf of working writers to protect free speech, freedom of expression and authors’ copyrights; fights for fair contracts and authors’ ability to earn a livable wage; and provides a welcoming community for writers and translators of fiction, nonfiction, poetry and journalism. Through its educational and charitable arm, the Authors Guild Foundation, it also offers free programming to teach working writers about the business of writing, as well as organizing events that highlight the importance of a rich, diverse American literary culture and the authors that contribute to it.