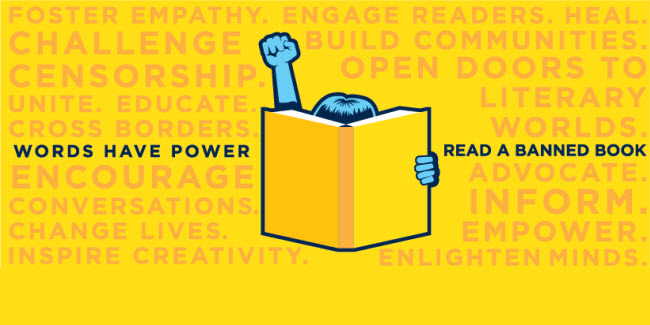 “There is more than one way to burn a book. And the world is full of people running around with a lit match,” Ray Bradbury wrote in Fahrenheit 451, his famous dystopian novel about a future where books are outlawed. Luckily, we don’t live in Bradbury’s dystopia, but every year people work to censor literature and ban books from libraries and bookstores. To combat this, and to promote the freedom of everyone to write and read, Banned Books Week was launched in 1982. The Authors Guild is proud to be a sponsor of this celebration of free ideas, along with other literary organizations like the American Booksellers Association and the American Library Association.

This year’s theme is Our Right to Read, “a celebration of the diverse range of ideas found in books, and our right as citizens to make our own intellectual choices.” Sponsors and supporters have planned a wide range of events and activities to promote free expression. The ALA is asking readers to participate in a Rebel Reader Twitter Tournament where readers complete tasks like taking “a selfie with a banned or challenged book” for a chance to win prizes. The Comic Book Legal Defense Fund has published a free Banned Books Week handbook online. The Dramatists Legal Defense Fund is performing Banned Together, “a celebration of songs and scenes from shows that have been censored or challenged on America’s stages.” The full list of events can be found here.

Although book banning may seem like a problem of the past, it still persists. In cooperation with the National Coalition Against Censorship, the Authors Guild has supported dozens of letters to local school boards and libraries where books (most often books for young readers) have been challenged or banned. According to the Banned Books Week Coalition, there was “an alarming 17% increase in book censorship complaints in 2016” compared to the previous year. According to the American Library Association, the most challenged books of last year were dominated by YA and Children’s books about LGBTQ issues.

The 10 most frequently challenged books were:

Banned Books Week runs from September 24th to September 30th. You can find more information about it at BannedBooksWeek.org.