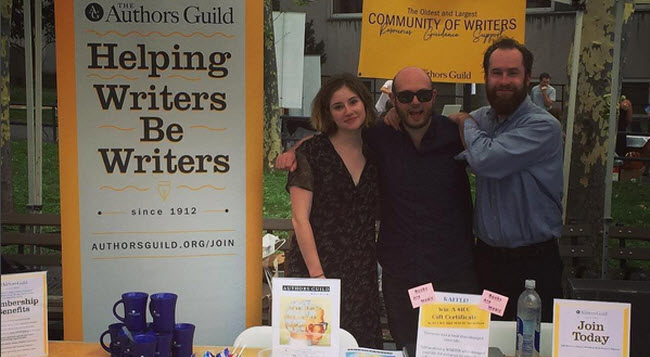 Brooklyn has perhaps more novelists per square inch than anywhere in the country, but it’s also home to plenty of voracious readers. On Sunday, September 17, an estimated 45,000 lovers of literature came to downtown Brooklyn for the 2017 Brooklyn Book Festival. It was a bright, sunny day as crowds of people moved through rows of book-fair tables and filled tents for a wide range of panels and readings.

The festival brought 300 authors from all around the world to Kings County, including Hisham Matar, Rivka Galchen, and Thi Bui. Of course, Brooklyn itself was well represented with Jacqueline Woodson, Hannah Tinti, Colson Whitehead, Jenny Zhang, and famous ex-Brooklynite Jonathan Lethem in attendance. Some of the highlights included Karl Ove Knausgaard, Joyce Carol Oates, and Lauren Sanders discussing family secrets; a panel on the influence of Twin Peaks creator David Lynch in contemporary fiction; and MSNBC host Chris Hayes in conversation with Heather C. McGhee.

All of these authors passed through the Authors Guild–sponsored Green Room, where writers and panelists checked in, relaxed, and enjoyed refreshments courtesy of the Guild. In addition to the panels, the Brooklyn Book Festival featured over 200 vendors at the Literary Market Place. These included local bookstores like Greenlight Bookstore and WORD, literary magazines such as Tin House and One Story, and advocacy organizations like Latinx in Publishing and VIDA: Women in Literary Arts. From the Authors Guild’s centrally-located booth, we spoke about our advocacy work and our offerings for emerging and established authors with hundreds of readers, as well as current and future members.

The festival kicked off on Saturday night with a gala at St. Francis College. During the event, it was announced that novelist Dana Spiotta had won this year’s prize for mid-career writers. The prize comes with a large $50,000 purse; it was created to help writers at a time in their careers when “many authors must decide to keep writing or leave the field.” Spiotta told BuzzFeed Books that she was honored to receive the award because “for me, a writer’s later novels are always more interesting. The early influences fall away, the writer hits a stride in which possibilities expand, abilities peak, and energy has not yet diminished.”

Colson Whitehead was also honored with the 2017 Best of Brooklyn (BoBi) Award. Since Whitehead couldn’t attend the ceremony, the award was accepted on his behalf by the poet Kevin Young, who in 2016 accepted a position in New York City as Director of the Schomburg Center for Research in Black Culture.

According to Brooklyn Book Festival vice president Liz Koch, this year had the largest turnout in the festival’s history.