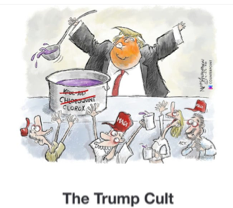 On May 26, 2020, the Authors Guild joined the Comic Book Legal Defense Fund and other free speech organizations to send a letter to online marketplace Redbubble, asking it to restore a satirical cartoon about President Trump to its website. The cartoon was taken down in response to a trademark cease and desist letter from attorneys for Donald J. Trump Inc. (“DJT”), because the cartoon entitled “Trump Cult” featured characters wearing red caps with MAGA insignias (for the campaign phrase “Make America Great Again”).

U.S. trademark law, like copyright law, accommodates free speech uses of trademarks, such as where a mark is used in commentary, news, or criticism, rather than to deceive the public as to the source of a good or service, or imply sponsorship or affiliation. This was clearly the case for cartoonist Nick Anderson’s use of “MAGA” on the hats in the satirical cartoon. As the Comic Book Legal Defense Fund letter states, “Mr. Anderson’s Work clearly disassociates itself with DJT and its products through mockery of MAGA apparel and its regular customers—i.e. the Trump supporters in the comic.”

Trump’s lawyers’ claims of trademark infringement were completely baseless, as they should and must have known. Rather, once again we see the president of the United States abusing intellectual property rights in a transparent attempt to suppress free speech and political expression. Anderson used “MAGA” in a clearly satirical manner to critique President Trump for making scientifically unsupported statements (here, suggestions about using hydroxychloroquine or disinfectants to treat COVID-19) that can cause harm to those who follow his advice: “In order to identify and lambast those supporters in his comic, Mr. Anderson used the well-known MAGA hat to express his satire and to critique.”

Cartoons are as entitled to protection under the First Amendment as political commentary as any other form of expression, and attacks on them should be treated just as seriously; political cartoons play an important role in public debate, and comics are no less protected because they may provide humorous rather than serious commentary.

The government cannot silence speech it deems unpalatable by making overreaching and invalid legal claims, and the letter spelled out the many flaws in the government’s claims.

In this case, free speech quickly triumphed. We are pleased to note that one day after the letter was sent, Redbubble reinstated the cartoon, admitting that “the removal was a violation of the First Amendment right to protected speech, including political satire.”