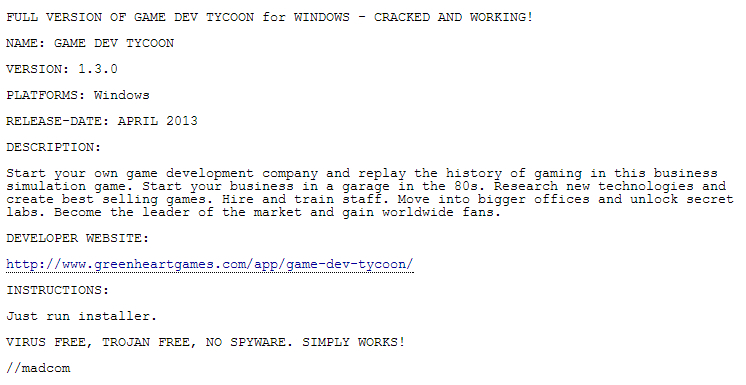 File this one under behavioral science experiments. Also, file it under brilliant promotional stunts.

On Sunday Australian game developer Greenheart Games, run by brothers Patrick and Daniel Klug, released its first product, “Game Dev Tycoon.” It’s a computer game in which players pretend to be game developers of the 1980s, starting their businesses from their garages.

Just as Greenheart Games opened its virtual doors for business, Patrick Klug purposely released an unlocked version of Game Dev Tycoon on the “number one torrent sharing site” (Pirate Bay, which beat out KickassTorrents for the honors, according to TorrentFreak.). Here’s what Patrick posted:

Start your own game development company and replay the history of gaming in this business simulation game. Start your business in a garage in the 80s. Research new technologies and create best selling games. Hire and train staff. Move into bigger offices and unlock secret labs. Become the leader of the market and gain worldwide fans.

Patrick Klug reports on his blog that within a minute of the post, users were downloading the game, soon maxing out the capacity of his torrent client.

The unlocked version that users were busily torrenting was different from real thing in one critical way, however: after players had been at the game for hours, so that the budding virtual tycoon has employees and real offices, a sales report appears as an in-game message:

Boss, it seems that while many players play our new game, they steal it by downloading a cracked version rather than buying it legally.

If players don’t buy the games they like, we will sooner or later go bankrupt.

A frowny face accompanies the message.

What’s most fascinating about this is the online discussions Patrick Klug found as the community of real gaming pirates tried to figure out what to do about the virtual ones in Game Dev Tycoon. Here’s one (boldface emphasis added):

Guys I reached some point where if I make a decent game with score 9-10 it gets pirated and I can’t make any profit. It barely sell 100k units […] Is there some way to avoid that? I mean can I research a DRM or something […]

There’s no point in inventing a new engine because the revolutionary game made out of it will get pirated and I will not be able to cover my expenses.

Yep, the pirate went there: admitted a willingness to consider employing DRM (Digital Rights Management, the encryption that locks up digital files), Kryptonite for file-sharing enthusiasts and their techno-utopian cousins.

Patrick Klug himself isn’t sure whether DRM is a good idea for a start-up like Greenheart Games. He points out in his blog that DRM inconveniences paying customers and can always be cracked, so it “only slightly delay[s] the inevitable. The only way to protect yourself is to create an online game.” (With online games, a company can monitor whether those logging in have legitimate access.) He laments that this is “probably a driving force to eradicate traditional single player games.”

Greenheart Games chose to sell Game Dev Tycoon without DRM for $7.99, and makes a pitch to those using the cracked version of the game that a low-priced DRM-free game is just the sort of thing the gaming community should embrace.

Those sales are probably brisk. The Greenheart Games ploy generated an enormous wave of publicity — a Google search turns up 65 news items including stories at CNN, The Independent, Ars Technica, and Wired. We also have an answer to an interesting question: How do online pirates react when put in the role of copyright owners?