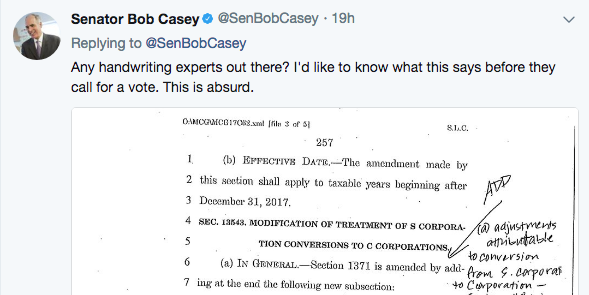 The Republican tax  overhaul charges forward. In the early morning hours the Senate passed its tax bill, altered by a series of last-minute amendments from the proposed bill that we covered Wednesday. No Senator saw a final version of the 500-page bill until shortly before the vote.

Now the legislation goes to a conference committee to reconcile the differences between the House and Senate versions, unless Republicans press the House to vote directly on the Senate bill.

Important legislation normally requires lengthy deliberation, negotiation, and compromise. But this juggernaut has proceeded at breakneck speed—or as Senator Ron Wyden (D-OR) said of the Senate Budget Committee’s rush: “[I]n less time than it takes to wash a car.”

Having conducted legislative advocacy on behalf of authors for more than a hundred years, we know the normal process for proposed legislation—that it must be seriously considered, and its consequences fully understood, before it becomes law. Studies are conducted, and hearings are held before the bill even makes it out of committee, and interested parties are given an opportunity to review the proposed legislation and provide comments.

For legislation that will affect authors, the Guild usually participates in all those steps: we review the studies, attend hearings, and testify before lawmakers; we take time to understand the legislation and analyze its consequences for authors; we provide written comments, and meet with lawmakers on both sides of the aisle (literary culture and copyright are seldom partisan issues); we form coalitions with other interested groups to coordinate lobbying activities.

But like most of the public, we have been shut out of this process. Virtually no public hearings were held, even though the law will have an enormous impact on all our finances, our ability to own our own homes, health insurance and access to health care, childcare, and education—core issues that most authors and indeed Americans care deeply about.

The bill is being touted as a tax decrease for the middle-class, but most of the benefits will go to businesses. Corporations will see a massive decrease in taxes, with the corporate rate moving from 35% to 20%. The tax rates for most individuals will be slightly lower initially (although some people will be bumped up to a higher bracket and will actually see a rate increase). The Senate bill phases out the individual rate cut in 2025, after which those making less than $75,000 a year will likely see a tax increase. And since most deductions and credits will be eliminated, people who itemize deductions may see their taxes rise immediately. Residents of states with high property taxes and high home values—especially New York, California, New Jersey, and Connecticut—will be especially hard hit.

Democrats were also excluded from the process. Senator Claire McCaskill (D-MO) said Friday afternoon, as the final vote neared, that she had just received a list of last-minute amendments, all by Republicans, not from the Senate leadership but from lobbyists who had seen them. Hours later she tweeted: “Here we are blindly re-arranging the American economy in the middle of the night.”

According to several recent surveys, less than a third of voters support the bill, far fewer than any other tax cut in the last few decades. (A November 15 Quinnipiac poll showed only a quarter of voters supporting the legislation.) Even Clinton’s outright tax hike received slightly more support. Nevertheless—despite strong objections to the asymmetrical consequences of the law—the Senate and House leadership would like to see the bill enacted before the end of the year.

Concerns about lack of transparency and the speed of the bill’s passage are compounded by the seemingly vague relationship some of its provisions have to any tax purpose. In an effort to get the support of Senators opposing the bill, various amendments were made and provisions added to the text—such as  permission to drill in the Arctic Preserve, “the lifting of a 1954 ban on political activism by churches, and the conferring of a new legal right for fetuses in the House bill—none of which directly affect the tax code. Indeed, the bill’s many motley provisions prompted C. Eugene Steurle, a senior fellow at the Urban Institute and a Treasury official during the Reagan administration, to liken it a “Christmas-tree.”

But others are drawing  a less colorful analogy, fearing that the bill is in fact a “Trojan horse” for a larger assault on public welfare programs such as Medicaid, Social Security, food stamps, and the Affordable Care Act, which is dealt a heavy blow by the bill’s repeal of the individual mandate (the ACA requirement that individuals must purchase health insurance if they don’t already get it through an employer, Medicare/Medicaid, etc).  A concern is that repealing the ACA mandate will result in fewer people purchasing health insurance, which in turn will cause premiums to skyrocket for everyone else on ACA plans (since the people who are most likely to drop their insurance are the healthiest people, not people who need it), and could even cause a number of insurers to drop ACA plans. The new bill will also probably trigger automatic cuts to Medicare due to a lack of tax revenue, though that’s unrelated to its ramifications for the ACA.

Since becoming law in 2010, the ACA has allowed many of our members— self-employed authors—to finally purchase affordable health insurance; and so, if this tax legislation becomes law, the Guild will closely monitor the extent to which the individual mandate repeal limits the availability of affordable insurance. At the same time, we continue to explore affordable options for new group plans.

We will continue to monitor the legislation and will keep you posted.