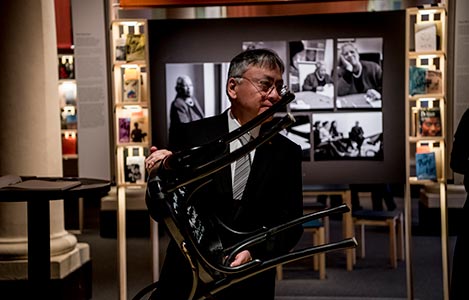 Kazuo Ishiguro delivered a moving and personal Nobel Lecture in Stockholm this week, looking back at what seem to him now to be pivotal moments in his writing life. The 63-year-old novelist began with a sidelong mention of last year’s winner of the literature prize, Bob Dylan, and ended with a call for literature to “include many more voices from beyond our comfort zones of the elite First-World culture.”

In awarding him the 2017 prize, the Swedish Academy called him a writer “who, in novels of great emotional force, has uncovered the abyss beneath our illusory sense of connection with the world.” The pick was both surprising—Ishiguro was not ranked highly in the betting markets—and widely celebrated in the literary world. He appeared at the academy to deliver his lecture, “My Twentieth-Century Evening—and Other Small Breakthroughs,” which you can watch here and read in full on the Nobel Prize website.

Ishiguro, whose Japanese family moved to rural England when Ishiguro was five, described how his identity led to his fiction writing. While outside of his home he became “thoroughly trained in the manners expected of English middle-class boys.” However, in his house with his parents who longed to return to Japan “there were different rules, different expectations, a different language.… What this all amounted to was that as I was growing up, long before I’d ever thought to create fictional worlds in prose, I was busily constructing in my mind a richly detailed place called ‘Japan’—a place to which I in some way belonged, and from which I drew a certain sense of my identity and my confidence.” He said his first novel was driven by “my wish to re-build my Japan in fiction, to make it safe, so that I could thereafter point to a book and say: ‘Yes, there’s my Japan, inside there.’”

There are hidden turning points in a writer’s career, he said.

“Often, they are small, scruffy moments. They are quiet, private sparks of revelation.… When they come, it’s important to be able to recognise them for what they are. Or they’ll slip through your hands.”

Last year’s decision to award the Nobel Prize to Dylan sparked a wide range of reactions, and Ishiguro made a point of the centrality of music to his work: “I should say here that I have, on a number of other occasions, learned crucial lessons from the voices of singers. I refer here less to the lyrics being sung, and more to the actual singing. As we know, a human voice in song is capable of expressing an unfathomably complex blend of feelings. Over the years, specific aspects of my writing have been influenced by, among others, Bob Dylan, Nina Simone, Emmylou Harris, Ray Charles, Bruce Springsteen, Gillian Welch, and my friend and collaborator Stacey Kent.”

Ishiguro ended his speech with a call for greater diversity in literature, in all senses of the word: “We must search more energetically to discover the gems from what remain today unknown literary cultures, whether the writers live in faraway countries or within our own communities.” Perhaps remembering that some critics sniffed at the science-fictional elements in Never Let Me Go and the fantastic in The Buried Giant, he added:

“We must take great care not to set too narrowly or conservatively our definitions of what constitutes good literature. The next generation will come with all sorts of new, sometimes bewildering ways to tell important and wonderful stories. We must keep our minds open to them, especially regarding genre and form, so that we can nurture and celebrate the best of them.”