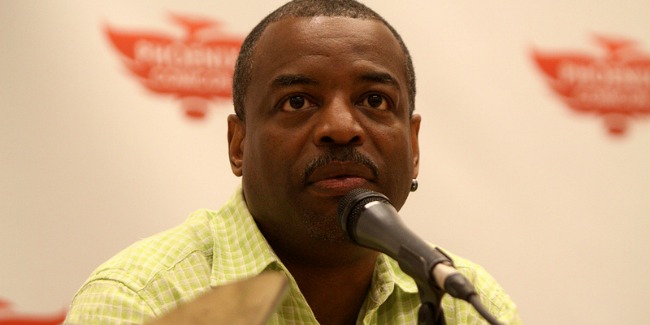 LeVar Burton has taught entire generations of kids to love reading, but a new lawsuit accuses the literacy advocate of not reading his contract. Burton, host of the PBS children’s show Reading Rainbow from 1983 to 2006, recently started a bookish podcast called LeVar Burton Reads where the actor and educator reads great short stories. The problem? On his podcast, Burton—who has called LeVar Burton Reads “a Reading Rainbow for adults”—has been using his Reading Rainbow catchphrase “but you don’t have to take my word for it.” Hollywood Reporter reported that the Buffalo, NY-based public broadcaster WNED has filed “a wide-ranging lawsuit that demands among other things that Burton’s company hand over administrative access to various websites and social media accounts.”

This isn’t the first time that Burton and his former employer have tussled. They’ve been feuding for years over Burton’s attempts to revive Reading Rainbow. Burton’s company RRKidz signed a licensing deal with WNED in 2011, but WNED alleges that Burton has violated the agreement. The conflict really took off in 2014 when Burton ran a successful Kickstarter campaign that raked in over 5 million in donations from fans who wanted to see the show come back.

WNED’s complaint claims that “As evidenced by Mr. Burton’s conduct since he began ‘teasing’ the public about the return of Reading Rainbow years before his company acquired any rights to do so, Mr. Burton’s goal is to control and reap the benefits of Reading Rainbow’s substantial goodwill — goodwill that unquestionably belongs to WNED.” Among the suit’s allegations are “copyright infringement, conversion, cybersquatting, violations of the Lanham Act, breach of contract and interference with customer relations.”

It’s sad to see a program as beloved as Reading Rainbow get dragged through the legal mud. The feuding makes it unlikely that we’ll see a Reading Rainbow revival anytime soon. No matter how the lawsuit plays out, that’s a loss for readers everywhere.