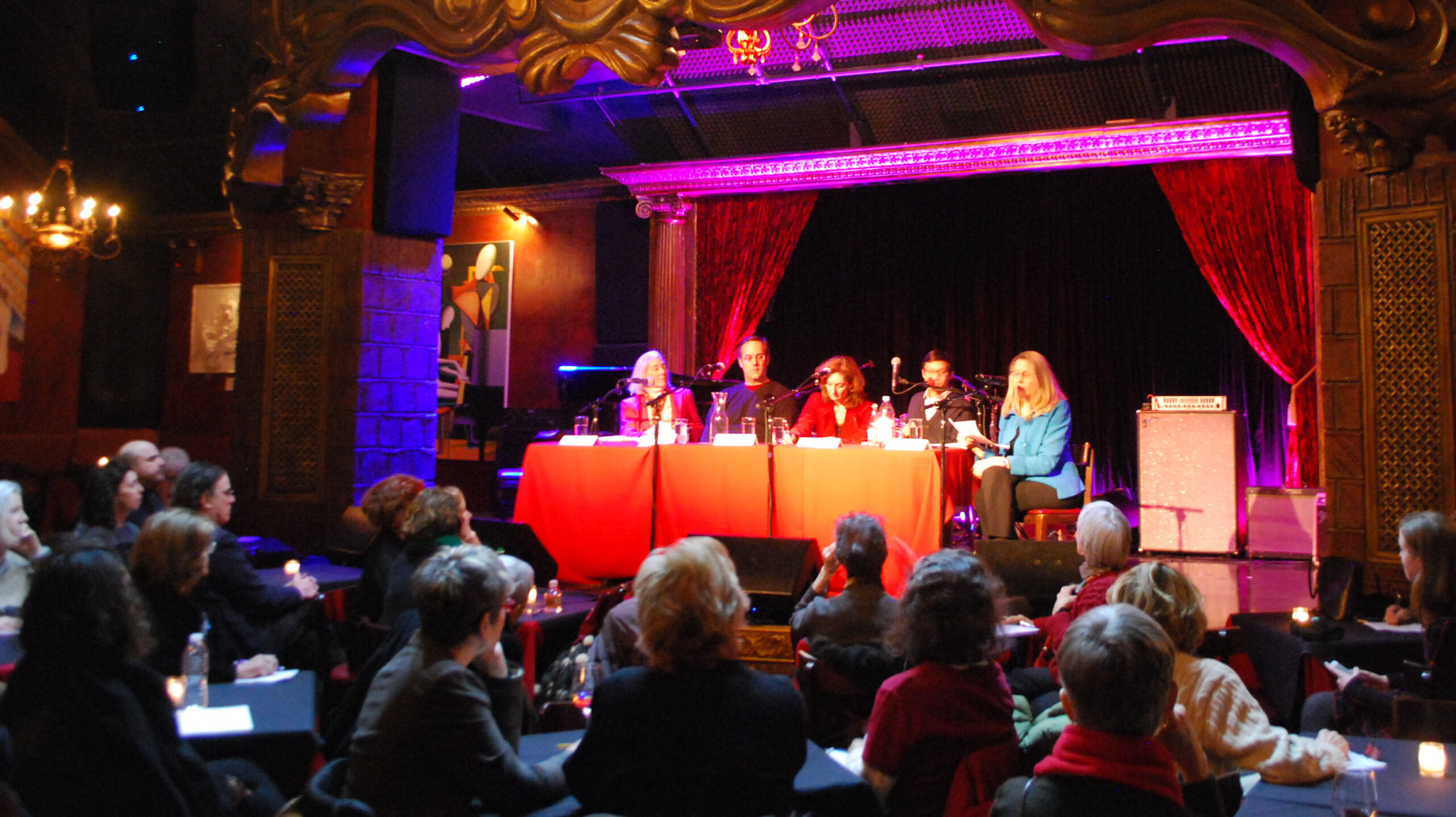 The Authors Guild hosted the first of its panels on new business models in the digital publishing landscape on February 17th. The event, “Navigating the Digital Marketplace: An Author’s Guide to New Business Models in Publishing,” shed light on some of the newer digital distribution platforms that have been drawing attention—subscription services, direct publisher-to-reader sales, and indie publishing, to name a few—and, most importantly, how we can use them to reach more readers and increase sales.

When we talk about authorship these days, “we spend a lot of time on doom and gloom,” said the Guild’s Executive Director Mary Rasenberger, who moderated the four-person panel. “But what we’re going to talk about tonight is opportunity.” The ensuing conversation, while recognizing the many burdens digital disruption has placed on authors, was largely optimistic. The panelists were Chantal Restivo-Alessi, Chief Digital Officer at HarperCollins; Joe Regal, co-founder and CEO of Zola Books; and Kevin Nguyen, Editorial Director of Oyster. Indie author and AG Council member CJ Lyons was slated to be in New York to sit on the panel, but the weather had other ideas. Lyons instead wrote written responses to a handful of prompts, which General Counsel Jan Constantine read aloud at the event.

“You may not want to be captain of your own ship, but it’s better than being down there in steerage”

One idea that found general support among the panelists was that having a successful career as an author now demands more than writing books. Career authors increasingly take on the role of small business owners, making more decisions at each step in the publishing process.

In comparing authors to small business owners, some panelists described the increasing responsibility authors (even traditionally-published authors) must take for the branding, promotion, and editing of their work. Others recognized the anxiety these duties can cause. Restivo-Alessi pointed out that publishers should still shoulder the brunt of the promotional efforts. “I don’t agree that authors need to be good at marketing,” she said to scattered applause. “That’s what [publishers] should be good at, and we should be helping [authors] do that better and better.”

But Zola Books CEO Joe Regal added that, like it or not, this may be the new normal for authors. “To some degree, let’s be honest, it sucks,” he said, adding that “on the other hand, the power to reach your audience is extraordinary.… You may not want to be captain of your own ship, but it’s better than being down there in steerage.”

“The future lies in being where the consumer is”

It’s certainly true that with more and more media platforms available, our ability to reach readers is greater than ever. The key is to translate reader access into sales. To that end, the panelists discussed a handful of new initiatives geared toward enabling book sales wherever readers encounter books, such as HarperCollins’s forays into direct publisher-to-reader sales. Regarding these efforts, Restivo-Alessi noted that “the future lies in being where the consumer is.”

Restivo-Alessi was quick to add, however, that readers don’t seek out particular publishers’ books—they follow the authors, which means that author engagement is crucial to any publisher’s efforts to sell directly to readers. Recognizing that it’s authors who bring in readers, HarperCollins agreed to “put some skin in the game” with their direct sales platforms, allowing authors to put buy buttons directly on author websites, and also adding an additional 10% royalty to any direct sale.

Similarly, Zola Books has been angling to make book-buying more flexible. Regal announced that his company will soon debut a product called “The Everywhere Store,” which is basically a buy button that can be dropped on an author’s website—or any other website, for that matter. It allows readers to buy books through Zola anywhere online they encounter them. Zola splits the retail revenue 50/50 with the author (that’s in addition to royalties), and the reader gets to bypass the giant Internet retailers and support any one of 50 independent brick-and-mortar stores Zola has partnered with. Regal emphasizes that diversity is essential to the survival of the literary ecosystem. “Rather than look at Zola becoming another Amazon,” he said, “I’d rather empower several thousand players to take some piece of the market themselves.”

Whatever platforms become available, and whichever we choose to use, it’s becoming clear that a major key to success in the new publishing environment will be placing books for sale in as many distribution channels as possible.

“Incremental Value,” Subscription Models, and the Future of the Backlist

With many major publishers now offering their backlist titles through “subscription services” of one kind or another, these platforms, which offer unlimited access to their repertoires of titles for a monthly fee, are becoming increasingly hard to ignore. Plenty of observers have been perplexed by the economics of this (if these services charge readers $10 a month for unlimited books, how can anyone hope to profit, and won’t subscriptions cannibalize individual book sales?), and Kevin Nguyen, Editorial Director of Oyster Books, was on hand to venture some answers.

While Nguyen couldn’t speak to the specific terms of any agreements between Oyster and the publishers they partner with, both he and Restivo-Alessi (whose HarperCollins was the first publisher to partner with Oyster) confirmed for the audience how authors are paid under Oyster’s model: not out of a royalty pool, as many feared, but rather, each time a customer reads beyond a certain percentage of a book, the publisher is paid for an e-book sale, and the publisher pays the author at the author’s e-book royalty rate.

Nguyen went on to describe Oyster’s vision that, by offering the possibility of renewed discovery to backlist titles, subscription services add “incremental value to both publisher and the author,” effectively enabling books to stay profitable for longer. It’s too early to say what effect subscriptions may have on print or individual e-book sales, but many seemed heartened by Nguyen’s clarification of the payment process and his assertion that “we want to make a business that’s sustainable for us, for publishers, for readers, and definitely for authors.”

One of the more salient points of the evening was made by CJ Lyons, who reminded the audience that no matter the sales platform or publishing format are involved, an author’s greatest duty is still to her readers. “No matter which publishing route you take for any individual project, you need to understand why that’s the best choice for you, for that title, and for your audience,” she wrote. Her views provide some much-needed clarity in what can be a maddening time of expanding and unproven options for authors. “It’s not important how you publish any given work—what’s important is how well you publish.”