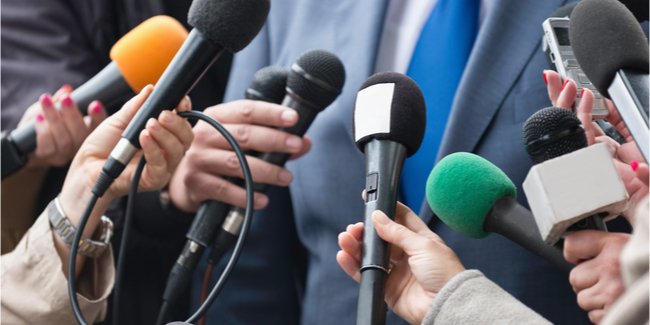 Democracy cannot exist without a free press that has unfettered access to information from all levels of government. The Trump administration’s decision to ban a CNN reporter, Kaitlan Collins, from a White House press event after she questioned President Trump on his relationship with his former attorney Michael Cohen is a clear violation of that tenet. No president should be allowed to exclude members of the press for asking tough questions—for doing their job. This is not a precedent we can abide.

The attacks on the press appear to be working, at least with a segment of Trump’s supporters. A public opinion poll by Ipsos for The Daily Beast found that 43 percent of self-identified Republicans believed “the president should have the authority to close news outlets engaged in bad behavior.” We find this terrifying. Schoolchildren know that this is what the First Amendment was written to prevent. It highlights the necessity of speaking out.

So we are supporting a proposed Senate resolution condemning the Trump Administration’s escalating attacks on the media and, in particular, the banning of Kaitlan Collins from the press event. Richard Blumenthal (D-CT) and nine co-sponsors introduced the resolution on August 1. The resolution:

(2)   condemns the escalating attacks by President Trump on reputable journalists and news organizations as “fake news,” “a stain on America,” and “the real enemy of the people”;

(4)   affirms that reporters and journalists must be able to feel free to do their duty without fear of reprisal from the Government.

Everyone who writes, everyone who speaks, everyone who believes in the principles on which our country was founded needs to stand up now. We see the president’s nakedly authoritarian instincts. He yearns to be a despot and no longer tries to hide it.

The Authors Guild also joined a bipartisan coalition in a letter sent to Press Secretary Sarah Huckabee Sanders on August 2 to protest the White House’s decision to bar the reporter. Censorship and suppression of the press must be combatted at every turn. When a leader feels free to bar journalists because they ask tough questions, it aims to intimidate all journalists and discourage them from asking the hard questions that we need them to ask.

This country was founded on the principle that despots can not be tolerated and, as such, leaders must be held accountable at all times. This is precisely why journalists and authors are so crucial in a democracy: so that our government cannot control access to knowledge.

The Guild is committed to this fight: for all American journalists and writers and the democracy we too often take for granted.