Q&A with an Editor: Mark Doten of Soho Press 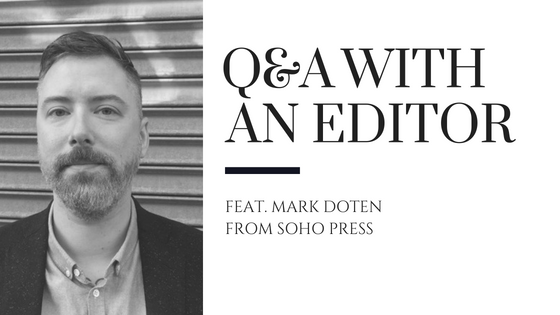 Founded in 1986, Soho Press is one of the leading independent publishers. Soho is especially known for its international crime fiction (published by the imprint Soho Crime) and its literary fiction. Mark Doten, the Executive Editor and Vice President who directs the literary fiction list, publishes a wide array of innovative voices including Diane Williams, Pola Oloixarac, and Matt Bell. Doten is also a novelist who was named one of the “Best Young American Novelists” by Granta in 2017. His debut, The Infernal, was published by Graywolf in 2015 and his next novel, the intriguingly titled Trump Sky Alpha, is forthcoming from Graywolf in 2019.

We talked with Doten about night writing, unagented submissions, and the advantages of publishing with an independent press.

You are an author as well as an editor. How has editing books affected your own writing?
Working as an editor keeps me attuned to formal issues in my own writing, in particular to questions of pace and structure. I edit during the day and evening, and do my own writing at night after my partner has gone to sleep, generally between 10 pm and 2 am. My first novel was half-written before I started at Soho, but my forthcoming novel, Trump Sky Alpha, which I began in late 2015, was written almost entirely at night, and I think of it as a night book. It would have been impossible to write it during the day; or if I had, it would have turned out very differently.

Soho publishes everything from international crime fiction to literary fiction. Can you tell us about the history of the press and how you got started editing there?
Soho was founded in 1986 as a publisher of literary fiction, with a mission to seek out work overlooked by the big houses. The Soho Crime imprint was launched in 1991, with a focus on international crime, and our young adult imprint, Soho Teen, will celebrate its fifth anniversary later this year. A notable early author for us was Edwidge Danticat, whose work was pulled from the slush pile by our co-founder, Laura Hruska. Soho went on to publish Edwidge’s first three books: Breath, Eyes, Memory; Krik? Krak!; and The Farming of Bones. When I started in 2008, Laura was publisher, and I was finishing up an MFA in Columbia’s writing program. I was hired as a half-time managing editor, a job which became full time at some point. Our current publisher, Bronwen Hruska (Laura’s daughter) took over in 2010, after her mother passed away. At that point I transitioned into Soho’s literary fiction editor. This was a happy move, because I wasn’t especially good at overseeing production schedules, and I’m not sure how long I or the press would have survived if I had continued as managing editor. The first book I edited at Soho was Alex Shakar’s Luminarium, and since then I’ve been fortunate enough to help build a literary list that includes writers from many different backgrounds who have engaged with fiction and our time in singular ways, including Hannah Lillith Assadi, Diane Williams, Matt Bell, SJ Sindu, Pola Oloixarac, Mike McCormack, Dale Peck, Okey Ndibe, Roy Scranton, and Brian Allen Carr, to name just a few.

What are the advantages for authors of publishing with an independent press like Soho?
Attention, care, time. An independent press with strong distribution (Soho is distributed by Penguin Random House) can get your book out into the world as widely as a big house can. We can also take risks that larger publishers shy away from. For example, we published two books by the experimental Irish novelist Mike McCormack to good reviews but modest sales. Then came a third, last year’s Solar Bones, which was long-listed for the Booker, and was reviewed everywhere, often rapturously. It has sold an order of magnitude more copies than the previous two books combined. Editors at large houses are often under considerable sales pressure, and would have had a hard time convincing the powers that be to stick with an author who had that sort of sales track. (I see submissions every week from authors who were dropped by big houses.)

The advances at big publishers are generally higher, and a big publisher can, for a few select titles a year, unleash a fairly massive marketing spend, but in many cases, an author is served as well or better by an independent publisher. My own fiction is published by a great independent, Graywolf Press, and there’s nowhere in the world I’d rather be.

Having said all that, there are wonderful editors working on exciting, innovative books at both big houses and independents, and we’re all part of the same community; our books are out there together, shelved in the same bookstores and libraries, and it’s a mistake for writers to be overly stringent in drawing these lines.

How many titles a year do you publish? And how far in advance is your catalog “booked” so to speak?
We publish around forty-five new titles a year—there are, roughly speaking, two crime titles a month, one literary title, and one YA title. We generally publish initially in hardcover for our crime and YA lists, while the literary list is split between hardcovers and trade paperback originals. In addition to those forty-five frontlist titles, we publish about another forty or so paperbacks each year that are either conversions of hardcovers from the previous year, or reissues of backlist titles. So we’re at eighty to ninety books a year, all told. The time from acquisition to publication varies (for instance, translations take extra time) but I’m generally working about eighteen months out. I need to acquire one more title to wrap up my 2019, and then it’s on to 2020! The temporality of life in publishing is interesting; I’m already living in the future, in an imagined world where Democrats have retaken Congress.

Do you accept unagented submissions?
Yes, though only for our literary imprint, not for YA or crime. I’d guess that of the ten or so new literary titles we publish each year, maybe two are unagented. This is important, because truly exceptional literary work does not always find an agent; or an author may not seek out an agent, for any number of reasons. Several of my favorite Soho authors initially came to us without agents—Okey Ndibe, Paula Bomer, Dan Josefson—though two of those three authors now have first-rate agents, and the third can certainly get one at any time. In terms of work that is unagented and came in through the slush pile, rather than work that I or another editor sought out or that came to us through some connection, that is less frequent, but it does happen. When submitting without an agent, think of the career of Edwidge Danticat, and have courage!

What type of manuscript would you like to see more of? And what type would you like to see less of?
I don’t see as many submissions from LGBTQ writers as I’d like, though I love to publish queer work. (A debut novel that we published last year, Marriage of a Thousand Lies by SJ Sindu, just won the Publishing Triangle’s Edmund White Award for Debut Fiction, and we have Dale Peck’s new and exceptionally queer novel, Night Soil, coming in August.) I look for authors from diverse backgrounds who are pushing boundaries, doing interesting things with form and narrative, and whose work feels plugged in to our current moment (and what a moment it is!). Often writers from communities that have been marginalized in some fashion see to the heart of our time most piercingly and interestingly. And less of? I would say to please not send me things that are blandly conventional—“basic,” as the kids say, or said—but since very few people see their own work that way, it won’t stop anyone.