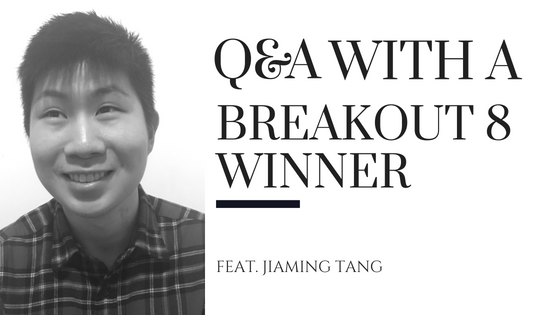 We interviewed each of the winners, and this week we are pleased to introduce you to the final Breakout 8 winner: Jiaming Tang. Jiaming Tang is a Brooklyn-based writer of queer immigrant fiction. His interests lie in representing marginalized experience through allegory and unconventional storytelling. He studies creative writing at Purchase College, SUNY.

I wrote “Dog City” a year ago, and my intent was to allegorize queerness in China. “Dog City” features a man who is unable to express himself or his desires—if he does, he will face punishment from his community and the government. The story’s obviously fiction, but it’s rooted in a very real fear of mine, which is that people will shun me if they find out I’m gay. Which I think is a fear shared by many non-white members of the LGBT community, especially those from countries governed by traditional modes of thought. And so this story, which I wrote while in a tiny village in Southeast China (where my family is from) was sparked from a sudden thought I had: What if I hadn’t emigrated to the States? Would I have had to live my entire life, as Li does in “Dog City,” in fear and hiding?

My natural inclination when writing is to make shit up, so the discipline required to be honest (in a factual sense) will be a good skill to (hopefully) acquire.

Paper Republic used to have this ongoing series of Chinese literature in translation, and I thought a few of those authors wrote really honest, incisive stories. I particularly liked Yan Ge’s “Sissy Zhong,” translated by Nicky Harman. Her novel, The Chili Bean Paste Clan, has been translated into English also by Harman.

Alexander Chee and Garth Greenwell aren’t my teachers, but they did a reading at my school (Purchase College), and one or both of them talked about how queer literature didn’t have to involve explicitly queer subjects. That queerness, in literature, could manifest itself as a mood or a theme or even as a kind of self-consciousness. This was really important for me to hear as a young reader—it allowed me to start thinking about queerness as not a physical fact, but rather, as something subjective, something felt.

I connect with other writers by complaining about writing. Writing’s rewarding and fun, but it’s also really difficult, so knowing that it’s hard for all of us helps keep me grounded.

I don’t know, but I can tell you the two pieces of advice I wish I’d never gotten: 1. That it’s not ok to end a sentence with a preposition. 2. That you should never start a sentence with a conjunction. Headache inducing stuff, I’ll tell you.