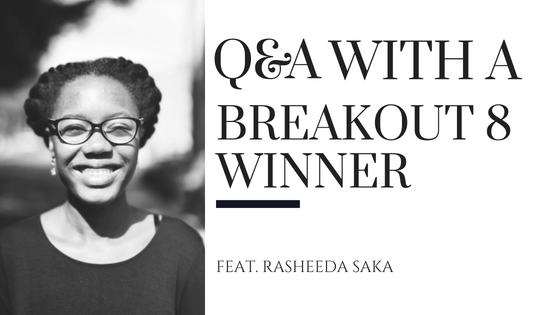 We interviewed each of the winners, and over the course of the next several weeks, we’ll post their Q&As! This week, we introduce you to Rasheeda Saka. Rasheeda Saka is currently an undergraduate at Princeton University studying English literature with minors in creative writing and spanish. In the past, she has studied fiction with Neel Mukherjee, Angela Flournoy, and Kirstin Quade.

I stumbled upon a Nigerian news article during my first semester at Princeton. The title of the article has stayed with me to this day: “Soka: Ibadan Forest of Blood and Death.” [Editorial note: In 2014, in Nigeria, many murder and torture victims were discovered in the Soka forest.] Though this article was naturally alarming, I think what drew me to it was the lack of answers and justice for the victims—everything was shrouded with collusion, deceit, horror, and ultimately, historical forgetting. The more I read about this event, the more I realized there was a huge hole of an unknown and wondered how someone would make sense of it.

Because I am still an undergraduate student, I am hoping to continue writing solid bodies of work, growing as a writer and reader, and pursuing my degree in English literature with minors in Spanish and Creative Writing.

I think Akwaeke Emezi’s debut novel Freshwater is absolutely breathtaking and dazzling. Through her glossy and inventive use of language and structure, she really breaks down ways of knowing and notions of Western ontologies and epistemologies—it’s just so gorgeous and refreshing! Her fiction, at its core, is devoted to challenging the status quo.

My creative writing professor, Neel Mukherjee, once told me that when writing scenes that are unsettling, disturbing, violent, or sad: “don’t blink.”

I find that I am most preoccupied with coming-of-age narratives and how young people first conceive of their own personal notions of the scope of the very large world we live in, and our entanglement with history and trauma. Additionally, I find myself returning to how one navigates their life enveloped in stark and troubling circumstances with power structures that they feel quite forcefully but cannot articulate.

I really loved Chimamanda Adichie’s Purple Hibiscus growing up. It was the second piece of Nigerian literature that I had ever read, following Achebe’s Things Fall Apart. I was in awe of the novel, mostly because the narrative is absolutely heart wrenching and her imagery so lucid and candid with a sense of real economy. Because I had known very little about Nigeria’s colonial history and legacies at the time it was also quite the learning experience for me. Unsurprisingly, major themes of self-discovery and coming of age in Adichie’s work are ones that I find again and again in my own writing.

Social media has been a big help with connecting with a few of my favorite writers, though from afar. Occasionally, I also watch featured interviews of said authors online. Mainly though, I read craft books and memoirs by writers I admire to learn about their own journeys as writers.

Less is more! The first draft of the story is not your final draft! Keep going!
Checklist.
Visualize and manage your workflow.
Tags.