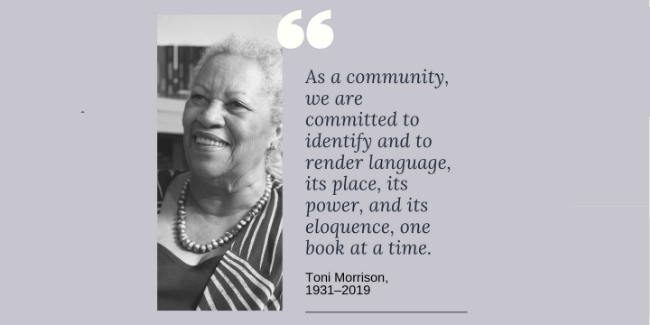 Toni Morrison, winner of the Nobel Prize in Literature, master prose stylist, chronicler of the black American experience, editor, professor, and longtime Authors Guild member, died this week at the age of 88. It is impossible to imagine contemporary American literature without her voice.

Morrison was recognized as one of the most influential writers in American literary history. In 1993, she was the first African-American woman to win the Nobel Prize for Literature. Her eleven major novels—The Bluest Eye, Sula, Song of Solomon, Tar Baby, Beloved, Jazz, Paradise, Love, A Mercy, Home, and God Help the Child—have earned extensive critical acclaim. She received the National Book Critics Award in 1978 for Song of Solomon and the 1988 Pulitzer Prize for Beloved. Her books of essays include Playing in the Dark: Whiteness and the Literary Imagination and The Origin of Others, drawn from her 2016 Norton Lectures at Harvard University. She was also the co-author, with her son Slade, of a number of children’s books. For many years, Morrison was the Robert F. Goheen Professor Emerita in the Council of the Humanities at Princeton University. Prior to her Princeton appointment, she held the Schweitzer Chair at the State University at Albany. She was a senior editor at Random House for twenty years.

Novelist and Guild member Tayari Jones wrote about Morrison’s influence on her work in The Atlantic in 2019: “It’s not every day someone voices your deepest, most rageful thoughts in an eloquent way and leaves another person dumbfounded. That doesn’t happen in real life, but it can happen in books. And you just feel like: At last, someone has said it.”

Morrison exerted her influence not only through her own fiction, but through her promotion of the voices of others. “I look very hard for black fiction,” she told an interviewer while she was working at Random House, “because I want to participate in developing a canon of black work. We’ve had the first rush of black entertainment, where blacks were writing for whites, and whites were encouraging this kind of self-flagellation. Now we can get down to the craft of writing, where black people are talking to black people.”

A member of the Authors Guild since 1971 and a founding member of the Authors Guild Foundation, Morrison received the Guild’s award for Distinguished Service to the Literary Community in 2017. Her award was presented by her longtime editor Robert Gottlieb—an author in his own right—who offered that Morrison has “made an indelible impression on everyone who has been writing in the last forty years.” In her speech that evening, Morrison reflected on the nature and importance of community to the literary calling. “The truth is, an author’s work is not merely competitive,” she said. “As strong as competition is, it is not nearly as strong or as needed as community.”

We’re all here together, and other than some of our authors and some book designers who get their names in the books, there are very few people in the world who know the names of those in the community, because they’re not listed in books. Bob Gottlieb’s name is not in any of my books. Nor are the chairmen or the chairwomen who run these houses. They’re not identified, nor are the publishers, editors, sales people, copyeditors, the financial stewards, the publicists, the bookstores, the chains as well as the small ones. Nobody knows their names. And it should remain that way. Anonymous or not, we are a necessary community. Necessary because the dangers to our profession are many. The first one is ignorance. Ignorance in so many places, that must be undone. Financial duplicity and the cost of human vulnerability via entertainment or simple instruction. Or simple, powerful fiction. In any case, as a community, we are committed to identify and to render language, its place, its power, and its eloquence, one book at a time.

Morrison is survived by her son Harold and three grandchildren. Her son Slade died of pancreatic cancer in 2010. The Authors Guild is honored by her many years of support and joins the rest of the global literary community in mourning the loss and celebrating the work of one of the greatest writers our country has produced.