The State of the Book Business in the U.S. and Abroad: A Trans-Atlantic View 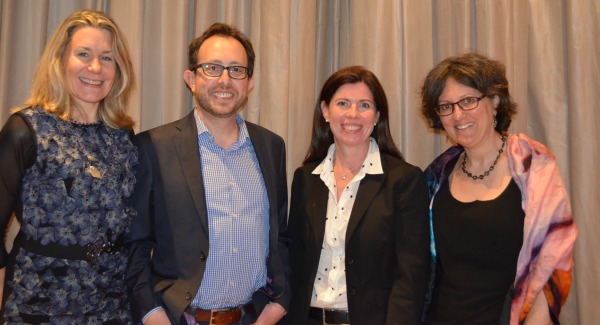 It’s been over a year now since the Authors Guild launched the Fair Contract Initiative. During that time, our explorations of the inequities found in many standard book contracts have prompted wide-ranging reflection on the state of book publishing—in the United States, naturally, but also in countries around the world, thanks to our international partners. On May 23, two of those partners—Nicola Solomon, head of the U.K.’s Society of Authors, and Siobhan O’Connor of the Writers’ Union of Canada—joined Authors Guild executive director Mary Rasenberger in New York City to discuss the state of book publishing around the world. The panel, “The State of the Book Business in the U.S. and Abroad: A Transatlantic View,” was presented by the Authors Guild Foundation.

The View from the U.S.

Rasenberger opened the conversation by pointing to the Guild’s 2015 member income survey, “The Wages of Writing,” which revealed that since 2009 authors’ income has decreased 30% for full-time writers and 38% for part-time writers. This income decline, Rasenberger argued, is the result of “a confluence of factors”: evaporating royalty streams for course packs and excerpts, the “information wants to be free” mindset, an increase in digital piracy, consolidation within the traditional publishing industry, and Amazon’s retail dominance, among other things.

Nonetheless, Rasenberger observed, the digital disruption has opened doors for authors and enabled a potential shift in power: authors have more freedom than ever to decide how to publish their work and who to partner with in the publishing enterprise. And we are starting to see some evidence of a willingness among some publishers to rethink the boundaries of the book contract. As a potential silver lining, she pointed to a recent deal between a midlist author of fiction and a well-regarded publisher that gave the publisher a 5-year license for print rights (publishers usually snatch print rights for the “duration of copyright”—the life of the author plus 70 years) and a 50-50 profit split on print royalties.

Such forward-thinking arrangements are still the exception, however, not the rule. Rasenberger outlined the many pitfalls of today’s standard publishing agreements, and spoke in detail about a few of the unfair terms the Fair Contract Initiative took aim at: e-book royalties that are 25% of net; out-of-print clauses that don’t let authors reclaim their rights when a publisher stops actively selling a book; non-compete clauses that restrict an author’s ability to write and publish; and “advances” that aren’t paid in advance of publication.

As Nicola Solomon addressed the state of the publishing business in the U.K., she revealed some startling similarities between the decline in writers’ incomes in the U.S. and in the U.K., where the earnings of professional authors have dropped 29% since 2005. This development is thrown into relief, she noted, by the fact that the job of author remains the single most desired occupation in Britain, according to a 2015 survey.

Despite that gloomy backdrop, Solomon focused on what the Society of Authors has been doing to make the situation better for authors, including its C.R.E.A.T.O.R. campaign for legislation to address unfair contract terms; a public campaign to ensure that writers are paid for their participation in literary festivals; and a push to secure translators and illustrators credit for their contributions to a book’s success.

Solomon finished her presentation on a droll note, protesting against those who insist that writers should write for free because it gives them “exposure” by pointing to a dictionary entry for that word: “the state of having no protection from something harmful; the action of placing oneself at risk of financial losses.”

From Canada, a Cautionary Tale

Authors’ income in Canada has followed a similar downhill slope as in the U.S. and the U.K. Writers’ incomes have dropped 27% since 1998, Siobhan O’Connor reported on behalf of the Writers’ Union of Canada. While much of this may be due to the same confluence of factors we face in the U.S., Canadian authors face an additional threat: a 2012 law that extended fair dealing (Canada’s equivalent of fair use) to use of copyrighted works for education. The Supreme Court of Canada has interpreted the law to mean that incidental copying of one or two pages to supplement instruction is covered by this educational fair dealing exception.

Following that decision, O’Connor explained, Canada’s Association of Universities and Community Colleges published “fair dealing guidelines” that were widely adopted. The guidelines claim that use of up to 10% of a copyrighted work—including entire chapters, entire short stories, entire articles and entire poems—can be made freely in an educational context. As a result, Canadian authors’ licensing income and book sales have dropped precipitously. 2013 saw a 27% decrease in K–12 book sales. A publishing industry study predicts a $30 million loss per year to Canadian content producers.

Asking how things ended up in this state, O’Connor proposed an answer: “relentless lobbying and really bad math.” And the way forward? “Relentless lobbying and accurate math,” she said. A test case has been filed to push back on the fair dealing exception for education, O’Connor said, and the Writers’ Union continues to work with government “to find a way forward to ensure that writers are paid and that schools have access to high quality texts written by and for Canadians.”