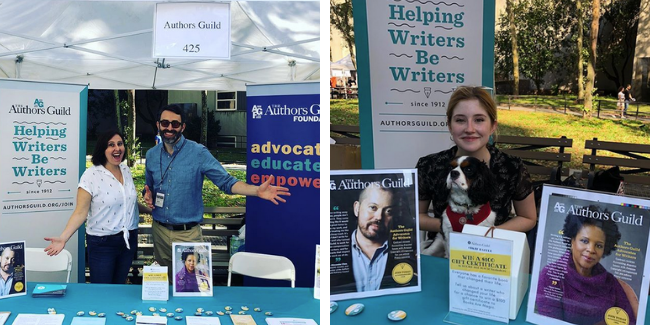 On Sunday, September 16, the Authors Guild was a featured sponsor of the 13th annual Brooklyn Book Festival, the largest free literary event in New York City. This year, the festival attracted nearly 45,000 book lovers and highlighted the talents of 300 authors of all stripes at a variety of readings, panels, and book signings. Hundreds of vendors exhibited during the day, including publishers, writing programs, magazines, and writers organizations. By all reports, it was the largest festival to date. Held on a glorious summer day on the concourse of Borough Hall’s Cadman Plaza, it was easy to see why it was such a popular destination for so many.

The Authors Guild was at the center of the action and our table was abuzz from 10am, when the festival started, to the close of the day at 6pm. Many Guild members swung by to say hello and hear about our latest advocacy news, and we were thrilled to welcome several new members. We had plenty of water and snacks on hand for humans and pets alike—there were dog treats aplenty.

The Guild’s General Counsel Cheryl Davis and staff Attorney Umair Kazi were present to talk about the Guild’s recent advocacy efforts, like our copyright infringement class action lawsuit on behalf of freelance writers, as well as our participation in the “Cockygate” trademark lawsuit. Throughout the day, they fielded general questions about the rights of writers, publishing contracts, and other issues.

The Guild was also the exclusive sponsor of the Festival’s Authors Green Room, which served as a central hub for all the participating authors who were scheduled to appear. Guild Council members Tayari Jones and Alexander Chee were among the featured panelists that day, as were the recipients of the 2018 Authors Guild Literary Service Award, Melissa Febos and Claudia Rankine. Guild members Jennifer Egan, A.M. Homes, Sigrid Nunes, R.O. Kwon, Audrey Niffenegger, and Terry McMillan were just a few of the writers who connected with each other in passing on the way to their events.

It was an inspiring day for book lovers and authors alike, and the Guild was proud to play a role in supporting the efforts of what has, after a dozen years, become a fixture of the New York publishing scene.