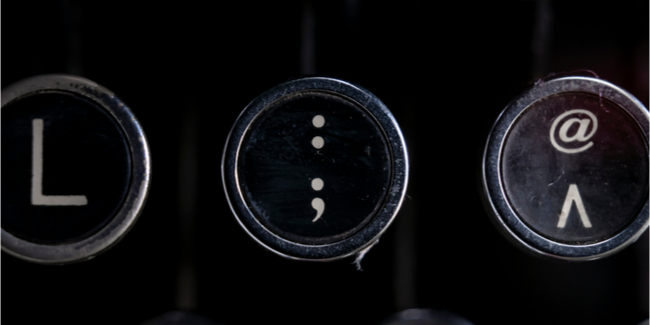 Our roundup of key news affecting authors. In this week’s edition: Showcasing your work online, what you didn’t know about the semicolon, and more…

Nine Things You Didn’t Know About the Semicolon
The Millions
“Love, fear, or outright hate—the semicolon can elicit them all. People have always had strong feelings about the semicolon, and its history testifies to its ability to touch hearts—or nerves. Here are a few things about its past that you might not know.”

Showing Toni Morrison What Beloved Meant to Me Took 20 Years
Literary Hub
“I am grateful because well before she inspected my notes in the margins, Toni Morrison gave a ragtag group of people like me the permission and inspiration to write—and to continue writing.”

Masterful Wordsmithing with Metaphor and Imagery
Jane Friedman
“Readers can be emotionally moved by the lingering effect of an entire scene or a singular word. Words are powerful. Don’t neglect the need to become a masterful wordsmith in order to become a master of the emotional craft.”

PRH Added £25 Million to Pearson’s First Half Earnings
Publishers Weekly
“As part of its report on its first half financial performance, Pearson said results at Penguin Random House were in line with expectations. Overall sales were ahead of the first six months of 2018 thanks to higher print book and audiobook sales, which offset another decline in e-book sales.”

Publishers Call on Sajid Javid to Ditch ‘Reading Tax’
The Bookseller
“The Publishers Association and leading members of the trade have written a letter to Sajid Javid calling for the new Chancellor of the Exchequer to end the VAT charge on digital publications in the next Budget. The open letter, signed by 42 senior publishing figures including PRH c.e.o. Tom Weldon and David Shelley, c.e.o. of Hachette UK, alongside PA president Peter Phillips, is part of the PA’s ‘Axe the Reading Tax’ campaign.”

The Life and Death of an American Indie Press
Literary Hub
“‘It honestly feels like an author’s Fyre Festival up in here,’ said Rebecca Jones-Howe, an author who has only received one payment since publishing Vile Men through Curbside in 2015. Literary Hub reached out to Curbside’s authors, contractors, and former staffers, and more than 20 of them came forward and spoke on the record about their struggles not only to get paid, but to even get responses from Giron, who describes himself as ‘El Jefe’ on the masthead of the site.”

Learning How to Write Girls with Agency in Fiction
Literary Hub
“I didn’t listen to people’s critique because I was attempting to write a book about girlhood, and the possibility that I was lacking the most fundamental skill for the task was intolerable to me. To acknowledge their critique felt like acknowledging that there was more to writing a concept into fiction than just feeling impassioned about it.”