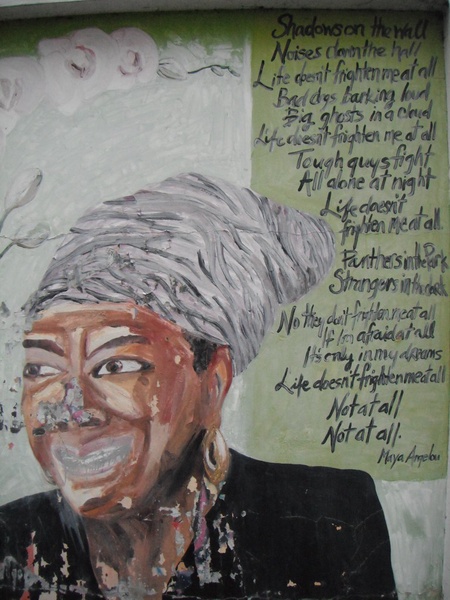 In this week’s edition, five book authors are among the 25 Americans chosen for the year’s MacArthur Foundation’s Genius Grants; five poetry nominees were announced for the inaugural Maya Angelou Books Award; questions regarding whether establishing a literary canon for children’s literature makes sense; Congress is looking deeper into Big Five Publishing practices for licensing e-books to public libraries; the world’s largest Spanish-language publisher is re-opening offices in the United States; and more.

Talking to Maya Angelou’s Son About the New Award Named in Her Honor
Literary Hub
Five poet nominees were just announced for the inaugural Maya Angelou Book Award: John Murillo for Kontemporary Amerikan Poetry; Kaveh Akbar for Pilgrim Bell; Natalie Diaz for Postcolonial Love Poem; Shane McCrae for Sometimes I Never Suffered; and Threa Almontaser for The Wild Fox of Yemen. The award, administered by the Kansas City Public Library and six Missouri universities, bestows $10,000 to an author of American poetry or fiction in alternating years that focuses on social justice and inclusion. Maya Angelou’s son, Guy Johnson, says he hopes it goes to book authors who understand the importance of investing in humans, stating that his mother’s attitude was: ‘I write from the Black experience, but I aim for the human heart.’”

Should a Canon for Children’s Literature Exist?
Book Riot
Both the National Endowment for the Humanities and the Mensa organization created lists of children’s literature that they say withstand the test of time. But both are woefully out of date and do not necessarily reflect our enhanced understanding of diverse cultures or issues of concern for today’s young readers and parents.

Creative Artists Agency to Acquire ICM Partners
Publishers Weekly
CCA announced that it will buy ICM Partners for an undisclosed sum. While the agencies are predominantly known for the representation of top Hollywood film and TV stars, both companies have significant interests in book publishing, with CAA having 11 literary agents on staff and ICM having 18. Speaking specifically to ICM’s books department, CAA said the group “superbly complements CAA’s content-driven motion pictures, television, and podcasting businesses, in addition to its speakers’ arm, and other divisions.”

Wyden, Eshoo Question Big Five Publishers Over Their Library E-book Practices
Publishers Weekly
Senator Ron Wyden (D-Oregon) and U.S. Representative Anna Eshoo (D-California) sent a letter to the Big Five publishers regarding their practices related to the library e-book market. Lawmakers want to know the total revenue from e-book licenses from 2018 to 2020 as well as profit margins for each publisher’s top 100 sellers in both print and digital, from library sales and the consumer market. In their letter to the publishers the lawmakers cite “the exorbitant costs and burdensome restrictions… draining resources from many local libraries,” and that libraries must “continue their traditional lending functions as technology advances.”

Grupo Planeta Is Relaunching U.S. Publishing Division
Publishers Weekly
Grupo Planeta, the world’s largest Spanish-language publishing house, is relaunching a division in the United States, after shutting down its Miami operations in 2008. “The market for books in Spanish in the U.S. has undergone a profound transformation. Today it is more diverse, with a greater degree of maturity and a growing demand for quality content. For Planeta, it makes perfect sense to resume our operations in the U.S. and bring the best authors and books in Spanish to the reading communities that make up the American tapestry,” said José Calafell, CEO for Group Planeta Latin America.