The Writing Life: Still Ours to Defend 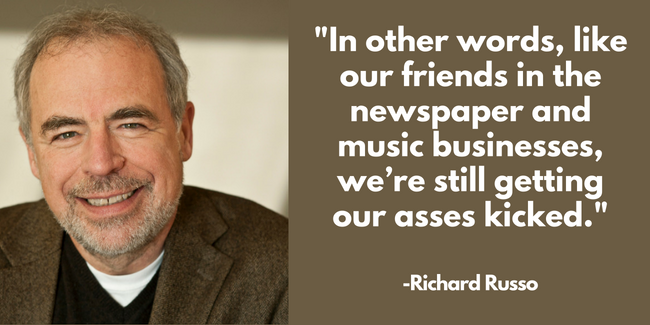 Back in 2013, I wrote an open letter to my fellow authors urging them to join the Authors Guild, especially those who, like me, have enjoyed the best the writing life has to offer. The AG’s core mission has been to protect authorship by defending copyright, but also, more recently, to help emerging authors prosper in a publishing ecosystem that is endangered (and here I have the rare pleasure of quoting myself) “by downward pressure of e-book pricing, by the relentless, ongoing erosion of copyright protection, by the scorched-earth capitalism of companies like Google and Amazon, by spineless publishers who won’t stand up to them, by the ‘information wants to be free’ crowd who believe that art should be cheap or free and treated as a commodity, by internet search engines who are all too happy to direct people to online sites that sell pirated (read ‘stolen’) books.” Those of us who made our names before the digital revolution, I argued, had it easy. Advances were larger. There were more publishers to buy our books, more newspapers with pages devoted to reviewing and advertising them. Publishers, less driven by numbers, played a longer game, waiting patiently for talented young authors to break out. Debut authors were sent on costly book tours to meet the independent booksellers who would ultimately make their reputations. Those of us who benefitted from these advantages, I maintained, owed a debt not only to subsequent generations of writers who are emerging into a diminished publishing landscape, but also to readers impoverished as a result of not knowing (how could they?) just how much breathtaking new talent was in the pipeline.

So, what’s changed in the last five years? Answer: quite a lot, and not nearly enough. Author incomes, here in the U.S., but also in Canada and much of Europe, continue to decline; many of us live at or below the poverty line. A tiny percentage can make a living through writing alone; the rest have to supplement their income by teaching or taking on other work or marrying people with more lucrative careers, strategies that have been known to lead in the end to exhaustion, writing less, and self-loathing (which many of us suffer from already). Traditional publishing continues to consolidate and contract, and many of the largest houses are part of conglomerates that demand books yield the same profit margins as flat-screen TVs, in effect squeezing out important midlist books that were never designed to be bestsellers. Writers are often told that the success of their published books depends on their ability to promote themselves on social media. Additionally, many of the trends that alarmed us in 2013 continue unabated. Those of us who make things—books, songs, films—continue to lose market share to those who distribute what we make. Government continues to side with Big Tech by viewing anti-trust issues solely in terms of low prices for consumers. Many digital magazines not only expect us to work for free but to thank them for the opportunity to “get our names out there.” Despite Guild efforts to spotlight the problem, some publishers continue to offer writers unfair contracts. And every year, it seems, the National Endowments for the Art and Humanities have to defend themselves against slashed budgets. If all this weren’t bad enough, the internet continues to ambush potential readers with click-bait mini-narratives (“You Won’t Believe What Happens Next!”) and social media ensures that we’re sufficiently outraged every moment of our waking lives such that we’re unlikely to sit down with an actual book.

In other words, like our friends in the newspaper and music businesses, we’re still getting our asses kicked.

And yet, the news is not all bad. The price of e-books has stabilized and many readers seem to have remembered the pleasures of the printed page, even as self-publishing and new digital platforms offer opportunities for writers that didn’t exist in 2013. Independent bookstores, written off for dead five years ago, are staging a comeback. The Eye of Sauron (Amazon) seems to have been distracted away from us (furry-footed Frodo and Samwise) by the events on other, larger battlefields (the rest of Retail). And there are other reasons to be cautiously (okay, very cautiously) optimistic. Big Tech, it seems, suddenly has a lot to answer for, thanks in part to the EU, but also to Guild authors like Franklin Foer and Jonathan Taplin, who have sounded the necessary and long-overdue alarm. Moreover, there’s the distinct possibility that other winds that have been blowing in the faces of creators may in the not-too-distant future be at our backs.

Tech Giants like Google and Facebook and Apple are all moving into the content business, which means (and what a bitter pill this must be for them to swallow!) they need us “content providers.” That means more book options and, for those of us who want to make the pivot into TV and film–writing, more opportunities there.

Well, no. That term “content provider” should give us pause. We can all hear the sneer, right? Traditional publishers may have underpaid us, but at least to them we were poets and painters and songwriters, terms that implied both respect and ownership of what we made, at least until we’ve sold it to them. The tech ethos is different. To them, we’re often seen as mere hirelings. And since those who hire us are in the business of business, they have a fiduciary responsibility to their stockholders to pay us as little as they can get away with and to make certain we understand that we’re mere workers, not partners in the enterprise. The conflict, of course, is as old as art and commerce, but today it’s playing out algorithmically and those algorithms have not been designed for our benefit.

If we creators don’t fight, the massive transfer of wealth from the creative sector to the tech sector that we’ve been witnessing since 2013 will most certainly continue.

Which means, my friends, that I must end this appeal as I ended the last one, by reminding you that the writing life, even as it changes before our eyes, is still ours to defend, and that we’re stronger together. If you’re not a member of the AG, please join, and if you are one, please forward this to your writer friends and invite them. We’ll be working for all authors in any case. But as I said back in 2013, there’s such a thing as being too late.