Toni Morrison on the Importance of Literary Community 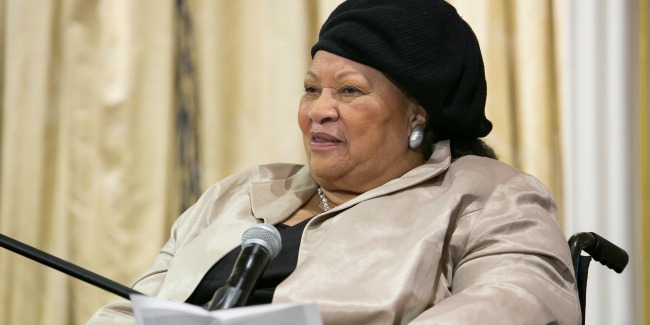 Last month in New York City the Authors Guild hosted our 25th annual benefit dinner, where we honored Toni Morrison, James Patterson, and the publishing company IngramSpark with awards for Distinguished Service to the Literary Community. The recipients of the Award were honored for their contributions to the rich literary world we live in and the multiple means by which authors reach readers. The dinner, held annually since 1993, benefits the Authors Guild Foundation, which conducts advocacy and education to support and protect the profession of writing and the welfare of writers everywhere.

Morrison’s award was presented by her longtime editor Robert Gottlieb—an author in his own right—who offered that Morrison has “made an indelible impression on everyone who has been writing in the last 40 years.” Morrison took the stage to a standing ovation. After accepting the award, she recalled her and Gottlieb’s trenchant but good-natured struggles over comma placement, and spoke of the importance of the Guild’s work providing community for authors. “The truth is, an author’s work is not merely competitive,” she said. “As strong as competition is, it is not nearly as strong or as needed as community.”

The recording and transcription of Toni Morrison’s speech can be found below.

Thank you, Bob Gottlieb. I can’t tell you how important our work together is. He is extraordinary and he is part and parcel of what I have accomplished. We read the same way. We think the same way. He is overwhelmingly aggressive about commas and all sorts of things. He does not understand that commas are for pauses and breath. He thinks commas are for grammatical things. We have come to an understanding, but it is still a fight.

Well, I wanted to say that this is a really extraordinary pleasure for me, to get the award and to be surrounded by the friends and families of my peers and to be honored by publishers and agents, sales people, critics—all focused on the services protected and fostered by the Authors Guild, for lo, these many years. It is clear in the Guild’s statement that the protection of authors and competition among authors are the themes of most of the services that they provide authors.

But actually and in fact, the truth of an author’s work, along with the duty of the Guild, is not merely or even solely competitive or negotiated. The truth is that as strong as competition among us is, it is not as strong or as needed as community. We’re all here together, and other than some of our authors and some book designers who get their names in the books, there are very few people in the world who know the names of those in the community, because they’re not listed in books. Bob Gottlieb’s name is not in any of my books. Nor are the chairmen or the chairwomen who run these houses. They’re not identified, nor are the publishers, editors, sales people, copyeditors, the financial stewards, the publicists, the bookstores, the chains as well as the small ones. Nobody knows their names. And it should remain that way. Anonymous or not, we are a necessary community. Necessary because the dangers to our profession are many. The first one is ignorance. Ignorance in so many places, that must be undone. Financial duplicity and the cost of human vulnerability via entertainment or simple instruction. Or simple, powerful fiction. In any case, as a community, we are committed to identify and to render language, its place, its power, and its eloquence, one book at a time. Thank you very much.