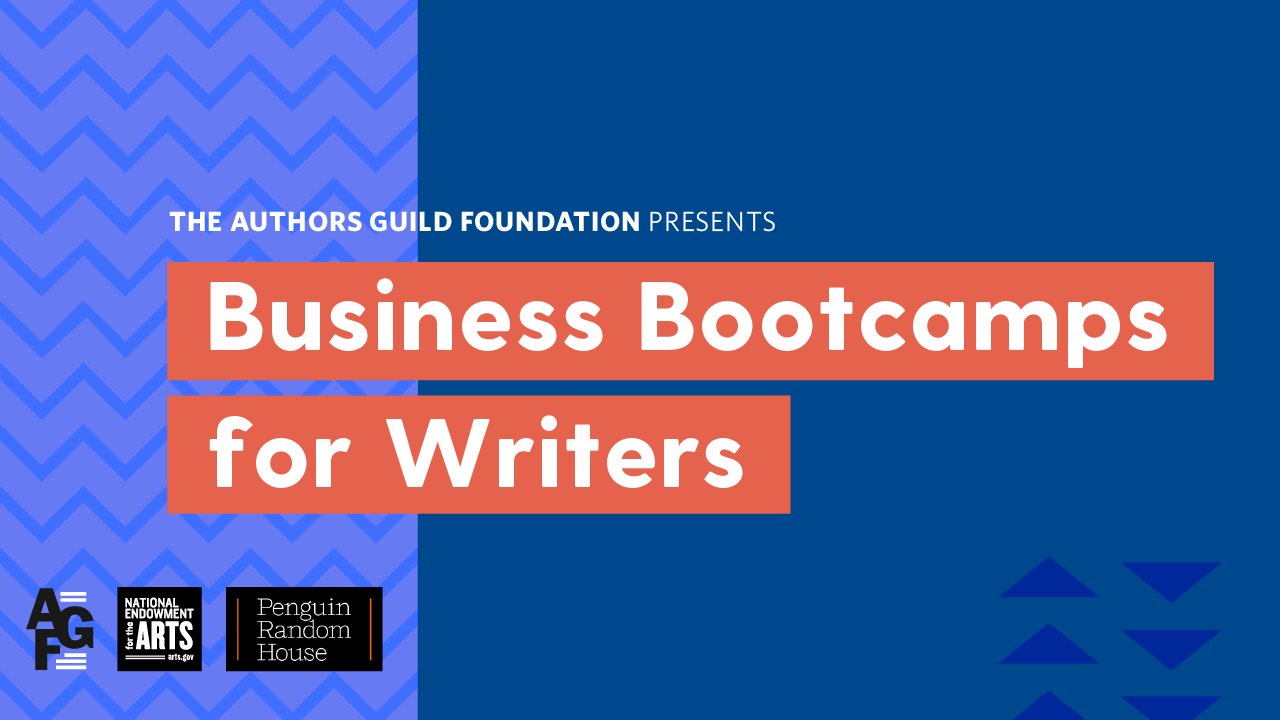 Sponsored by the Authors Guild Foundation with the support of the National Endowment for the Arts, Bootcamp webinars are open to the general public and free of charge

New York (October 12, 2021): The Authors Guild Foundation, the charitable and educational arm of the Authors Guild, the nation’s oldest and largest organization for published writers, today announced the return of its Business Bootcamps for Writers. Commencing October 18, Business Bootcamps for Writers is a series of free webinars for early and mid-career authors that provides them with the relevant tools and resources to manage their careers and successfully navigate the publishing marketplace.

“We initially launched the Business Bootcamps for Writers in 2018 as a free, one-day intensive held in person across various locations around the country, targeting communities that lacked such programming or connections to the publishing industry,” said Mary Rasenberger, CEO of the Authors Guild and Authors Guild Foundation. “We had to rethink that with the pandemic, which is why we are now offering the Business Bootcamps for Writers as a series of webinars unveiled over several months. By offering the curriculum online, we can reach a larger number of writers who wish to participate no matter where they live. We will lose the intimacy and community building of the in-person program but hope to replace it with smaller workshops to be held later in the year.”

The Business Bootcamps for Writers curriculum educates authors about just what it takes to create, publish, and market books in an intensely competitive climate, including a deep dive focusing on earning a sustainable living as an author. Interested writers are welcome to participate in as many or few of the webinars as they like. Topics include, but are not limited to, the various paths one can take to publication, finding the right literary agent, understanding book contracts, legal vetting of manuscripts to reduce liability risks, best practices in marketing and promotion, and the economics of the writing life, including how to diversify one’s income.

Interested authors can register now for the Business Bootcamp for Writers webinars scheduled this fall, the first of which begins October 18 at  7PM ET / 4PM PT. An additional series of webinars in Spring 2022 will explore topics selected in collaboration with our partners. While membership in the Authors Guild provides numerous benefits to both traditionally and independently published authors, anyone can register for Bootcamp webinars, which are offered free of charge thanks in part to a grant from the National Endowment for the Arts, Penguin Random House, and other generous donors.

About the Authors Guild and Authors Guild Foundation
The Authors Guild is the nation’s oldest and largest professional organization for writers. Its mission is to empower working writers by advocating for the rights of authors and journalists by supporting free speech, fair contracts, protecting author copyrights, fighting for a living wage, and creating an engaged and welcoming community. For more, visit www.authorsguild.org. The Authors Guild Foundation is the charitable and educational arm of the Authors Guild. It educates, supports, and protects American writers to ensure that a rich, diverse body of literature can flourish. The Foundation believes that an abundance of free literary expression is essential to our democracy, and that can only be achieved by protecting authors’ constitutional and moral rights to benefit from their work.