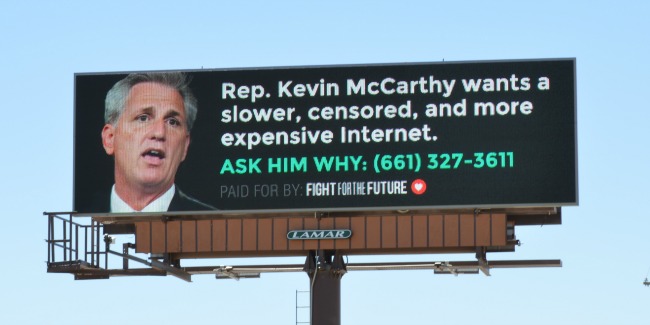 Our round-up of key news affecting authors. In this week’s edition: Net Neutrality activists launch billboards, recipes inspired by your favorite works of literature, and more…

The advocacy group Fight for the Future released a series of crowdfunded billboards targeting lawmakers who have come out in support of the FCC’s plan to gut net neutrality. The billboards come on the heels of the massive July 12th day of action, and arrive just in time for the August Congressional recess. The billboards aim to send a strong message to representatives  contemplating support for the FCC’s plan to repeal net neutrality. These representatives’ commitments are currently being tracked through a “congressional scorecard” on BattleForTheNet.com.

In an ongoing literary recipe series, Kate Young of The Guardian cooks up recipes inspired by her favorite works of literature. The latest: wonton soup inspired by Amy Tan’s The Joy Luck Club: Ginger, mushrooms, wontons, and, in the words of Amy Tan, some “delicate sprigs of cilantro floating on top.”

New Dominion Bookshop, an independent bookstore that has served Charlottesville, VA since 1924, has reopened for business after the tumultuous weekend there. Julia Kudravetz, the store’s manager, told Publishers Weekly on Monday afternoon that the bookstore’s employees are “reeling” from the weekend’s violence. The shop will resume regular hours after shutting down early on Friday afternoon and all day Saturday and Sunday.

In a defamation lawsuit filed by Sarah Palin, the editor of a discredited New York Times editorial testified that he failed to consult the paper’s previously published reports before he rewrote the piece. The editorial originally stated a PAC associated with the former Alaska governor had distributed a map displaying crosshairs targeting several members of Congress. The piece was later corrected to read that the crosshairs targeted the members’ districts, not the representatives themselves. The Times filed a motion to dismiss the case, and, in an unusual order, Judge Jed Rakoff of the U.S. District Court for the Southern District of New York requested the testimony to help him decide whether or not to dismiss.

HarperCollins Gets Global and Physical

With ebook sales static, the Big-Five publisher has doubled down on both international expansion and domestic print distribution. To bolster the latter, HC CEO Bryan Murray told Publishers Weekly, the publishing house will focus on helping independent bookstores grow and placing titles in retail chains other than bookstores.

After playwright Stephen Adly Guirgis issued a cease-and-desist letter to San Francisco’s Shelton Theater for cutting his script to the play The Last Days of Judas Iscariot, the playhouse has shut down its production of the show, conceding its cuts were done without the playwright’s permission and in violation of copyright law.