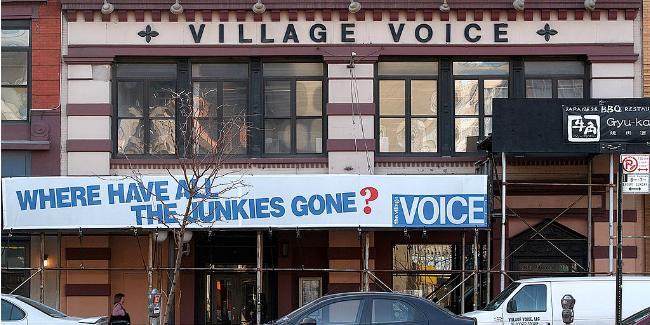 Our round-up of key news affecting authors. In this week’s edition: Elizabeth Kolbert discusses the unchecked power of technology giants, The Village Voice ends its weekly print edition, 100 books across America, and more…

Who Owns the Internet

Elizabeth Kolbert discusses Jonathan Taplin’s Move Fast and Break Things: How Facebook, Google, and Amazon Cornered Culture and Undermined Democracy and Franklin Foer’s World Without Mind: The Existential Threat of Big Tech in her article about the unchecked power of technology giants to shape and manipulate politics.

From how to display your genre to making your series look cohesive, here’s a list of do’s and don’ts when it comes to creating professional book covers.

The Village Voice Is Ending Its Weekly Print Edition

After more than 60 years, The Village Voice will be shutting down its weekly print edition. The newspaper will continue on in digital form.

Appeals Court Grapples with Digital Files, and the Business of Selling Used Songs

The Second Circuit Court of Appeals heard arguments on Tuesday in an important copyright case. The case centered around music reseller ReDigi’s appeal of a 2013 decision holding that selling second hand copies of music files is infringing. The current law, which ReDigi seeks to change, is that digital files cannot be transferred under copyright’s “first sale” doctrine, which allows purchasers of copyrighted material to sell their copies in a secondary market.

AG note: In the unlikely event ReDigi wins, lending and selling purchased ebooks is sure to be next.

100 Books Across America: Fiction and Nonfiction for Every State in the Union

Emily Temple at LitHub recommends two books for every state in America.

The president of the International Publishers Association has urged the Chinese government not to take punitive action against Cambridge University Press following the publisher’s decision to restore online access to hundreds of academic articles it had been asked to remove by Chinese authorities.

Did This Book Buy Its Way Onto The New York Times Bestseller List?

A YA novel has been removed from the top position on the New York Times bestseller lists, after evidence is found of strategic preorders.

Photo by Herder3 (Own work) [CC BY-SA 3.0  via Wikimedia Commons