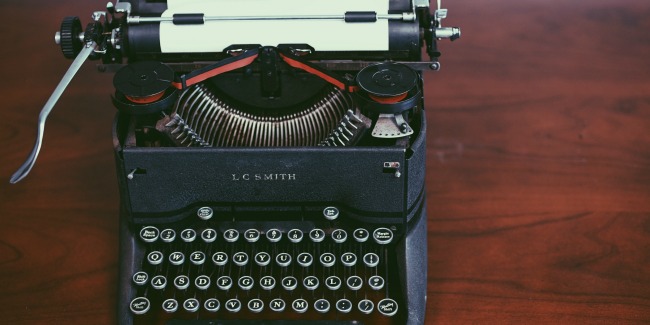 Jacqueline Woodson has won the Astrid Lindgren Memorial Award, the world’s largest prize for children’s writing, and will receive $600,000 at a ceremony on May 28 in Stockholm. “It’s important to hold up mirrors for kids to see their experience is legitimate,” she said. “Too often those mirrors aren’t there for them.”

Amazon says it is committed to policing third-party sellers but that the high volume of sellers makes it difficult to find all of those that are violating the rules. Maureen McMahon, president of Kaplan Publishing said, “it is important for publishers to be aware of what is going on with the third-party buy buttons, and to be willing to experiment with ways to monitor, and to discourage, sales of books that aren’t new.”

The World’s Smallest Publishing House: A Typewriter in a Bookstore

Michael Gustafson writes about opening Literati Bookstore and his public typewriter experiment:“I inserted a clean piece of paper and let it be. There were no prompts. No directions. Just the world’s smallest publishing house, waiting for an author.”

In an effort to ensure that John Oliver’s book was a surprise, it was decided that the book would initially be made available exclusively to Amazon. Many indie booksellers, including Harvard Book Store, are disappointed. Harvard Book Store’s head buyer Rachel Cass says, “I worry that this type of thing does long term damage to our industry as a whole. If there were customers who called their local indies to get the book this week, and found we couldn’t supply it, they may be less likely to try us first next time.”

The Federal Circuit sent Oracle’s copyright infringement lawsuit against Google back to the district court to determine damages in Oracle’s favor. The litigation, which so far has involved two jury trials and multiple appeals, has been going on for eight years and could ultimately result in major changes to the law of fair use.

A man sent to death row for a crime he didn’t commit started a book club with his fellow inmates. “It was like a whole new world opened up, and guys started talking about what books they liked. Some guys didn’t know how to read, others were real slow, almost childlike, and had never been to school beyond a few grades.”

Photo by Daniel McCullough on Unsplash