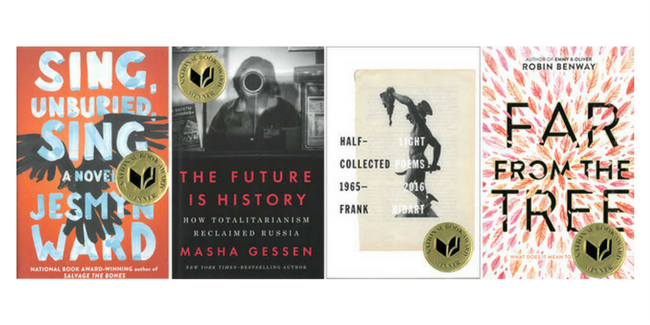 Our round-up of articles of interest and key news affecting authors. In this week’s edition: The National Book Awards winners, publishers experiment with audio-only production, and more…

There’s a Digital Media Crash. But No One Will Say It

How the “pivot to video,” combined with a large volume of publications, platform monopolies, and lack of investors, is causing a full-blown digital media news crash.

The 68th National Book Awards were held on Wednesday night at Cipriani in Lower Manhattan, hosted by Cynthia Nixon. President Bill Clinton attended the event, among many notable figures from the literary world, to deliver the Libertarian Award for Outstanding Service to the Literary Community to Scholastic president and CEO Dick Robinson.

Podcasts and audiobooks are a booming business with the under-35 crowd. Publishers are noticing and looking to use podcasts and audio originals to tap into that market. They hope that new audio titles will also draw consumers to discover other titles in their catalog.

Against Amazon: Seven Arguments, One Manifesto

Writer and critic Jorge Carrión’s manifesto on the state of literature in a world controlled by Amazon. The essay was originally published in Spanish in April in Jotdown magazine.

Book World to Close All 45 Stores, Including 20 in Wisconsin

Senior vice president of Book World says that all stores will close on November 2nd unless an interested buyer comes forward.

Michael Selleck, Simon & Schuster’s executive vice president for sales and marketing, is retiring at the end of this year. Selleck’s departure comes as the publisher has undertaken a major reorganization of its sales and distribution structure, with Gary Urda being named senior vice president of sales and Michael Perlman named vice president and general manager of S&S Publisher Services.

Missouri’s Attorney General Josh Hawley has issued an “investigative subpoena” looking into whether Google manipulates search data and user information to favor its own services over competitors’. Hawley’s investigation comes amid growing concerns about Google’s trade practices and follows the EU’s whopping $2.7 billion fine on the tech giant for violating anti-trust regulations.