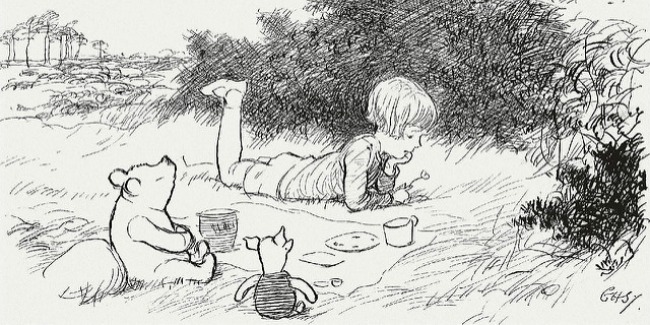 Our round-up of articles of interest and key news affecting authors. In this week’s edition: Behind the scenes with a book cover designer, big data meets literature, and more…

A Federal Court Judge stopped a copyright infringement case from proceeding as Allen Say’s illustrations and book, set to release on Halloween, were deemed to be an “imagined biographical retrospective of a real-life artists written for children,” and thus a work of scholarship, exemplary of the fair use exception to copyright infringement.

On Christopher Robin, War, and P.T.S.D.

A film is soon to be released with one the most cherished characters in children’s literature, Winnie-the-Pooh. The film titled “Goodbye Christopher Robin” is a sharp contrast from the previous versions of the classic tale. The movie is based on the real life of Christopher Robin Milne, the son of A. A. Milne, and chronicles the adult “clash between reality and innocence, war and peace, privacy and fame, and parent and child.”

Reading by the Numbers: When Big Data Meets Literature

Stanford University Professor Franco Moretti urges scholars to stop reading books. He states that truly grasping the laws of literature requires “distant reading”—reading with the help of computer-assisted crunching of thousands of texts at a time. This big-data approach to literature is controversial and criticized, however he argues that this approach aids in understanding the “broad, slow, massive changes [in literature] that we haven’t described before.”

We teamed up with the American Booksellers Association to bring together emerging and established authors in bookstores around the country in October.

Behind the Scenes with a Penguin Random House Book Cover Designer

Go behind the scenes with Penguin Random House designer Lynn Buckley to learn more about her process for designing book covers.

Popular hyperlocal websites Gothamist and DNAinfo were shut down on Thursday, a week after staffers voted to join WGA-East, leaving the 115 employees without jobs. In a letter that was posted on the front pages of the now-defunct sites, owner John Ricketts said that he’d made the decision to pull the plug on the websites because they were failing to turn a profit, although Mr. Ricketts—a strong opponent of unions—had previously hinted that he would shutter the sites if the union vote was successful.

“The service offers access to such top authors in the genre as Nora Roberts and Debbie Macomber, plus a roster of narrators that includes popular performers like Blair Underwood and Dermot Mulroney.”