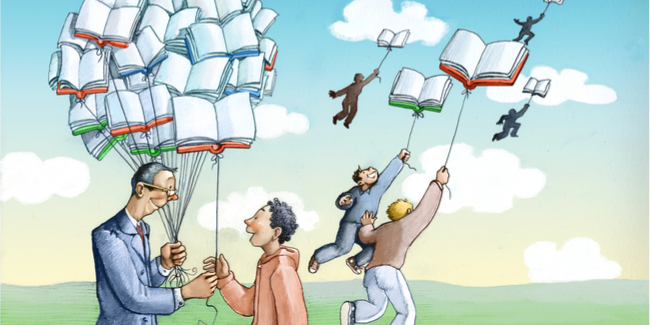 The Board of a West Virginia Library Reverses Decision to Refuse ‘Fear’
The Washington Post
“There are fearless libraries, and then there are libraries without ‘Fear.’” A West Virginia library refuses to carry Bob Woodward’s book Fear: Trump in the White House—and then reconsiders.

Uncommon Translations
Bomb Magazine
In an interview with Kyle Paoletta, literary translator Emma Ramadan discusses how she chooses which books to translate, pitching titles to publishers, ownership, and the drafting process.

Penguin Random House Changes Library E-book Lending Terms
Publishers Weekly
Penguin Random House has announced that it is changing its terms for library e-book lending, “moving from a perpetual access model (where libraries pay a higher price but retain access to the e-book forever) to a metered model (with lower prices on e-books that expire after two years).”

Red-Hot Book Sales Show Americans Love to Read About Trump
NBC News
Sales of political books are up 25% this year according to NPD Bookscan, and books about President Trump in particular have been topping the nonfiction bestseller charts this year.

Woodward Book Breaks 93-Year Publishing Record
The Hill
“Bob Woodward’s new book, ‘Fear: Trump in the White House,’ sold more than 750,000 copies through its first day of release, the most for any title in Simon & Schuster history, according to the 94-year-old publisher.”