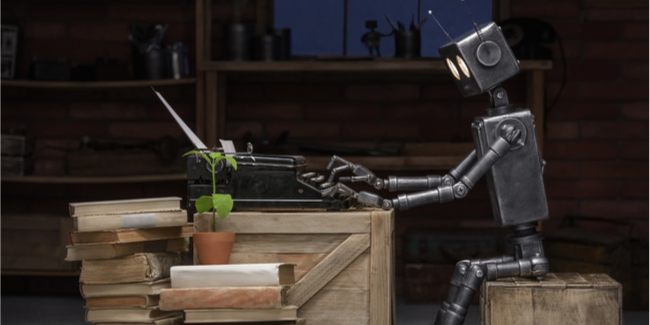 Our round-up of key news affecting authors. In this week’s edition: Amazon caught selling counterfeit books, the rise of the robot reporter, and more…

Dan Mallory, 2 Starkly Similar Novels and the Puzzle of Plagiarism
The New York Times
“The plot parallels between Mr. Mallory’s novel and ‘Saving April’ were ‘likely too thin to support an infringement claim,’ since some of the plot points at issue—like the unreliable female narrator and a young victim who turns out to be a perpetrator—are well-worn tropes in thrillers. Still, the overlap is significant enough to give some readers pause.”

Amazon Caught Selling Counterfeits of Publisher’s Computer Books—Again
ArsTechnica
“In some cases, individuals have simply copied the text from other books directly and sold them through Amazon as their own works.”

Book Agent in the Morning, Carpenter in the Afternoon
The New York Times
“Edward Orloff represents a roster of buzzy writers, but he also builds bookshelves for some of New York’s biggest literary stars.”

Former White House Aide Cliff Sims Sues Trump After Attack over Tell-All Book
The Washington Post
“The lawsuit accuses Trump of having his campaign serve as ‘an illegitimate cutout and step into the shoes’ of the government in an attempt to silence Sims, in violation of his First Amendment rights.”

This Typewriter Repairman Was Told Computers Were King. Twenty Years Later, He’s Still in Business
The Los Angeles Times
“‘In a world that’s too fast and too easy, a typewriter slows you down,’ he said. ‘If you type a word wrong, it’s wrong. If you miss a space, you missed it. That’s endearing to people now.’”

The Rise of the Robot Reporter
The New York Times

“As reporters and editors find themselves the victims of layoffs at digital publishers and traditional newspaper chains alike, journalism generated by machine is on the rise.”

Welcome to the Bold and Blocky Instagram Era of Book Covers
Vulture
“At a time when half of all book purchases in the U.S. are made on Amazon—and many of those on mobile—the first job of a book cover, after gesturing at the content inside, is to look great in miniature.”