Lotería: From Manuscript to Marketplace 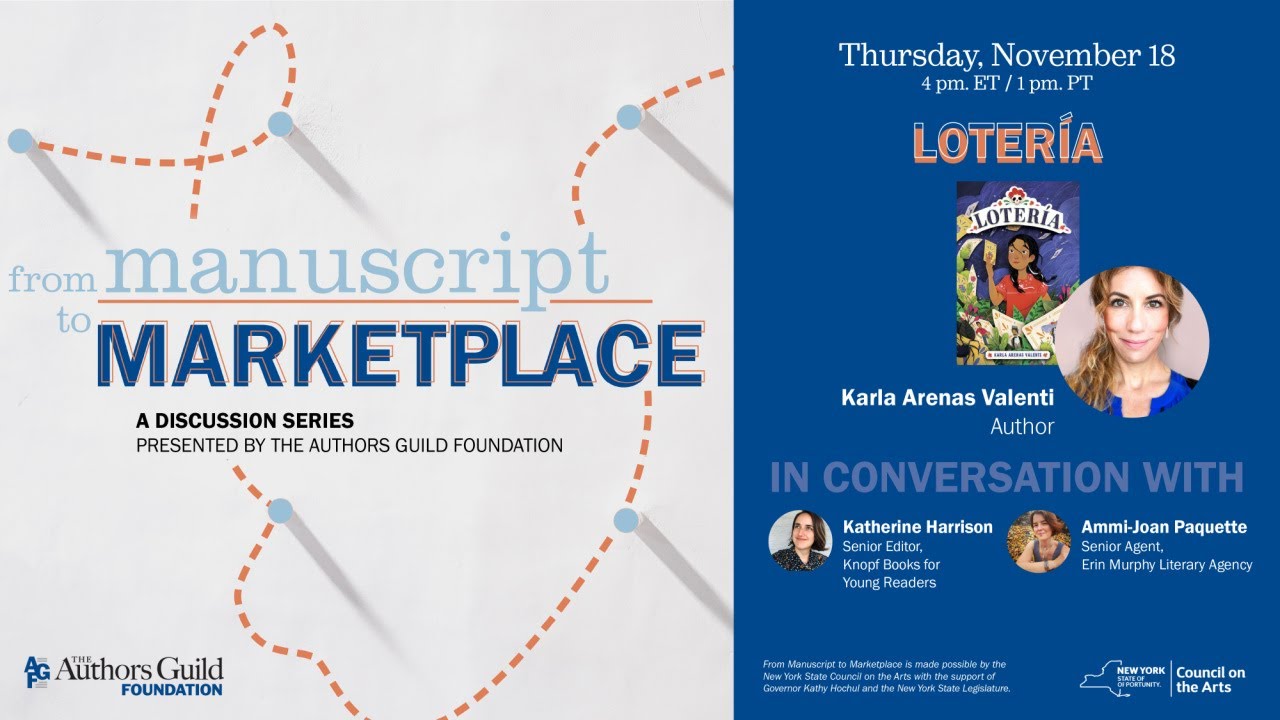 This From Manuscript to Marketplace event features Karla Valenti, the author of Lotería, in conversation with Ammi-Joan Paquette, senior agent at Erin Murphy Literary Agency, and Katherine Harrison, senior editor at Knopf Books for Young Readers. Designed with an audience of fellow writers in mind, From Manuscript to Marketplace offers case studies of the path to publication and candid conversations about the current realities of publicity, social media, virtual events, working with agents and editors, and more. Each event provides a unique portrait of the collaborative process behind the scenes.

If you would like to purchase Lotería, we recommend using one of the links on the author’s website.

Karla Arenas Valenti was born and raised in Mexico City. Since then she has put down roots in many places she now calls home: Japan, France, Germany, and most recently the Chicagoland area where she lives with her husband, three kids, two cats, and hundreds of books. She writes picture books and middle grade novels. In a starred review, the School Library Journal called her debut novel, Lotería, “a magical, philosophical tale rooted in Mexican lore.” Find her at www.karlavalenti.com.

Katherine Harrison is a senior editor at Knopf Books for Young Readers, where she has worked for over ten years, editing picture books, middle grade and YA literature. Her list includes authors and illustrators like Lauren Castillo, Elizabeth Lim, Liesl Shurtliff, Camryn Garrett, Matt Haig, Dave Eggers, Phoebe Wahl, Jess Keating, and Trudy Ludwig. In her early days, she had the honor of collaborating on books by Markus Zusak, R.J. Palacio, and Philip Pullman. Katherine is always seeking stories that challenge us to look at the world from a new angle, and she is deeply committed amplifying diverse voices—diverse not only in racial or cultural identity, but gender, sexual orientation, class, ability and ideology. Perhaps most importantly, Katherine is interested in stories that spark kids’ curiosity and inspire them to become lifelong readers.

Ammi-Joan Paquette is a senior agent with Erin Murphy Literary Agency, representing all types of children’s and YA literature. She is also the author of the novel The Train of Lost Things, and picture books including Mucky Truck, Ghost in the House, and The Tiptoe Guide to Tracking Fairies. With acclaimed author Laurie Ann Thompson, she is also the co-author of the “nonfiction with a twist” series, Two Truths and a Lie. In her agent acquisitions, Joan is particularly drawn to richly voiced, unforgettable characters and settings, as well as tightly-paced, well-plotted stories with twists and turns that keep you guessing right until the end. Visit her on the web at: www.ajpaquette.com.

In the hottest hour of the hottest day of the year, a fateful wind blows into Oaxaca City, slipping into the window of eleven-year-old Clara. Unbeknownst to her, Clara has been marked for la Lotería – a game of chance being played by Life and Death. As each card is played, it reveals a new twist in Clara’s fate—a scorpion, an arrow, a blood-red rose. And the stakes could not be higher. If Life wins the game, Clara will live to a ripe old age. If Death prevails, she’ll flicker out like a candle. But Clara knows none of this. All she knows is that her young cousin Esteban has vanished, and she’ll do whatever it takes to save him, traveling to the mythical Kingdom of Las Pozas, where every action has a price, and every choice has consequences. And though it seems her fate is sealed, Clara just might have what it takes to shatter the game and choose a new path.