Making the Switch from Academic to Trade Publishing 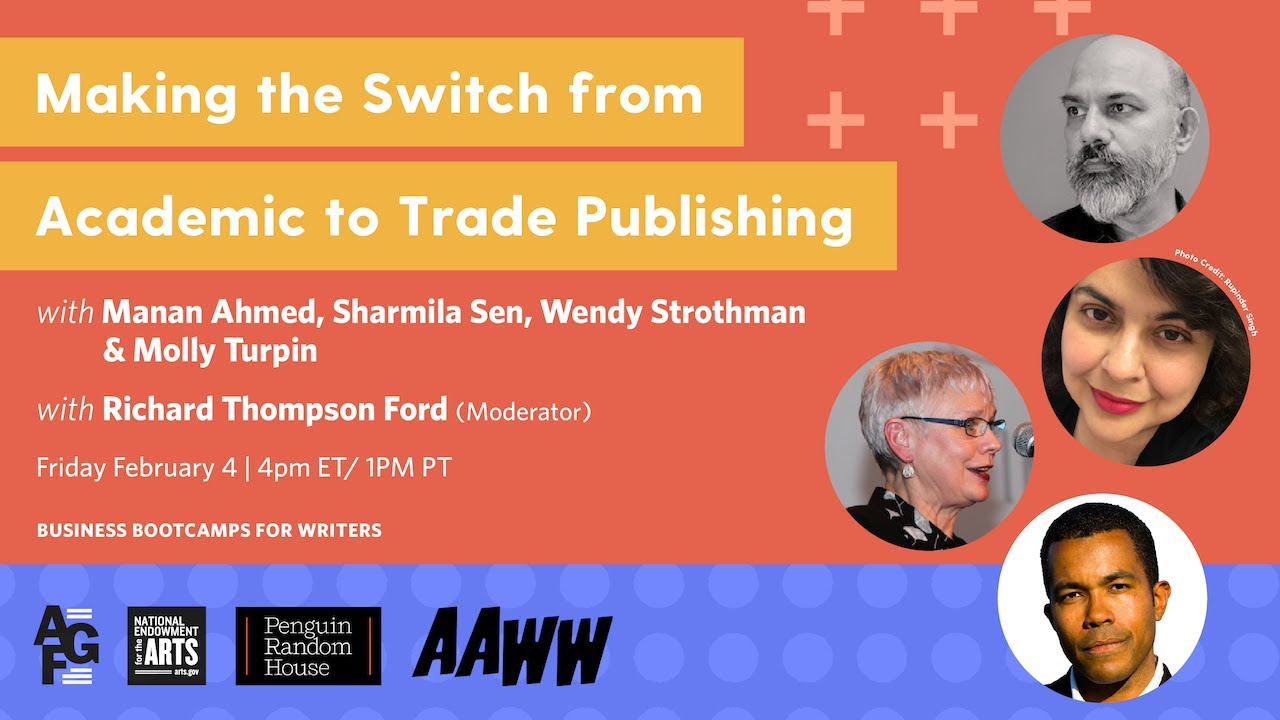 Academic writers who want to reach a larger retail audience should be prepared for the alternate universe of trade publishing. Indeed, writing for the trades calls for many differing tactics, from details such as citation formatting to the approach you take in writing a proposal. You will likely want to find an agent who sees the market appeal of your book, and your acquiring editor will be curious about your social media and marketing prowess. This panel will discuss what to expect and provide advice to help ease the transition. Featuring Sharmila Sen, editorial director of Harvard University Press and Belknap Press; Molly Turpin, editor at Random House; literary agent Wendy Strothman of The Strothman Agency; and Manan Ahmed, author and associate professor in the Department of History at Columbia University. Moderated by Richard Thompson Ford.

Special thanks to the Asian American Writers’ Workshop for collaborating with the Authors Guild Foundation on this panel.

Manan Ahmed, associate professor at Columbia University, is a historian of South Asia and the littoral western Indian Ocean world from 1000-1800 CE. His first monograph, A Book of Conquest: Chachnama and Muslim Origins in South Asia (Harvard University Press, 2016), is on the intellectual life of an early thirteenth-century Persian history Chachnama also known as Fathnama-i Sind (Book of the Conquest of Sindh). His second monograph, The Loss of Hindustan: The Invention of India (Harvard University Press, 2020), tells a history of the historians of the subcontinent from the tenth to the early twentieth century. He is currently working on two book projects. One, under contract with The New Press, is on memory, history and historiography in Pakistan. The second is on decolonization as method and praxis for history writing.

Sharmila Sen is the author of the award-winning memoir-manifesto Not Quite Not White (Penguin USA, 2018) and Editorial Director of Harvard University Press. Prior to her appointment at the press, she was a member of the Harvard English department faculty. Sharmila received her B.A. from Harvard and her Ph.D. from Yale. She lives in Cambridge, MA, with her husband and three children. Photo credit: Rupinder Singh.

Wendy Strothman founded The Strothman Agency in 2003 after seven years as publisher of Trade & Reference at Houghton Mifflin Company where she oversaw all adult, reference, and children’s publishing, and edited five books with Philip Roth as well as works by Arthur Schlesinger and John Kenneth Galbraith. She was director of Beacon Press in Boston for twelve years and began her publishing career at the University of Chicago Press. As agent, she represents serious non-fiction by scholars and journalists. In the past five years, two clients, David Blight (Frederick Douglass) and David Kertzer (The Pope and Mussolini), have won Pulitzer Prizes, and two clients, James Scott (Target Tokyo) and Wendy Warren (New England Bound) have been Pulitzer Finalists. Her clients include Sian Beilock, Martha Hodes, Alison Richard, Judith Resnik, Ruth Ben-Ghiat, Richard T. Ford, Joanne Freeman, Kenn Kaufman, Thanassis Cambanis, Kathryn Miles, Amy Ellis Nutt, and Yanis Varoufakis. Wendy was a trustee of Brown University for six years and served as Secretary of the Corporation of Brown University for ten years. She currently serves on the Board of the Association of Authors Representatives and the Copyright Clearance Center. She is based in Stockbridge, MA, and Midcoast Maine.

Molly Turpin is a senior editor at Random House, where her recent publications include Tiya Miles’s All That She Carried, which won the National Book Award for Nonfiction in 2021, and the National Book Critics Circle Award finalist The Price of Peace by Zachary Carter. Her list of scholars, journalists, and artists includes award-winning and bestselling authors such as Mona Chalabi, Kathleen Belew, Jason Stanley, Victor Luckerson, Kathleen DuVal, Dave Hage, Josephine Marcotty, Leslie Chang, Robert Kaplan, Julia Sweig, Thomas Levenson, and Sam Bloch.

Richard Thompson Ford (moderator) is the George E. Osborne Professor of Law at Stanford Law School. He has practiced law with the firm of Morrison & Foerster, served as a Commissioner of the San Francisco Housing Authority and worked as a policy consultant for the city of Cambridge, Massachusetts, the City and County of San Francisco, California and the County of San Mateo, California. He writes for both scholarly and popular audiences in the New York Times, the Washington Post, the Boston Globe, the San Francisco Chronicle, The Christian Science Monitor, Esquire.com and Slate, where he has been a regular contributor on legal affairs, as well as in the Harvard Law Review, the Stanford Law Review and the Yale Law Journal. He has written several books, including The Race Card: How Bluffing about Bias Makes Race Relations Worse, Rights Gone Wrong: How Law Corrupts the Struggle for Equality, and Dress Codes: How the Law of Fashion Made History.

Building a Successful Relationship with Booksellers

Marketing & Publicity
View More
By continuing to browse or by clicking "Accept All Cookies," you agree to first- and third-party cookies being stored on your device to enhance navigation of our site, and to help us analyze our site traffic and personalize our content and ads.
Accept All Cookies
Manage consent