Sevastopol: From Manuscript to Marketplace 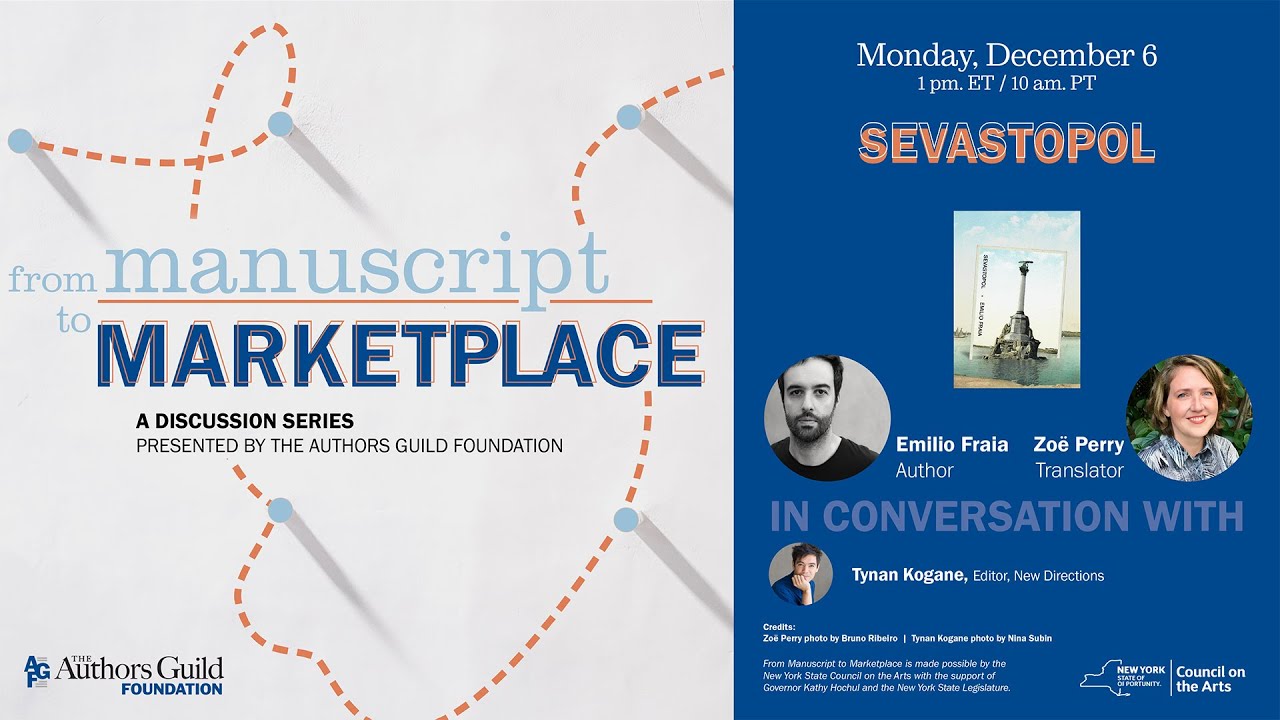 Emilio Fraia and Zoë Perry in conversation with Tynan Kogane

This From Manuscript to Marketplace event features Sevastopol author Emilio Fraia and the book’s English translator Zoë Perry, in conversation with New Directions editor Tynan Kogane. Designed with an audience of fellow writers in mind, From Manuscript to Marketplace offers case studies of the path to publication and candid conversations about the current realities of publicity, social media, virtual events, working with agents and editors, and more. For this event, the author, translator, and editor will discuss the story of the book’s English-language translation and their experience releasing the U.S. edition.

From Manuscript to Marketplace panel discussions will take place via Zoom and include time for a Q&A. All writers are encouraged to attend, especially new authors looking to learn more about the business of writing and publishing. Please be courteous and respectful to the panelists and do not solicit them with manuscript submissions unless specifically invited to do so. The event will take place via Zoom with automatic closed captioning. To request any other accessibility features, please email support@authorsguild.org and we will make every effort to accommodate.

If you would like to purchase Sevastopol, we recommend using one of the links on translator Zoë Perry’s website.

Emilio Fraia was born in São Paulo in 1982. His English-language debut, Sevastopol, translated by Zoë Perry, was recently published by New Directions in the U.S. and Lolli Editions in the UK. Fraia was named one of Granta’s Best Young Brazilian Writers. In English his texts have appeared in The New Yorker, The Paris Review, Grand Journal, and Two Lines 19: Passageways. Photo credit: Renato Parada.

Zoë Perry‘s translations of contemporary Portuguese-language fiction and non-fiction have appeared in The New Yorker, The White Review, Granta, Words Without Borders, Latin American Literature Today and the Paris Review. Her translation of Emilio Fraia’s book Sevastopol was published in 2021 by New Directions (US) and Lolli Editions (UK). Photo credit: Bruno Ribeiro.

Three subtly connected stories converge in this chimerical debut, each burrowing into a turning point in a person’s life: a young woman gives a melancholy account of her obsession with climbing Mount Everest; a Peruvian-Brazilian vanishes into the forest after staying in a musty, semi-abandoned inn in the haunted depths of the Brazilian countryside; a young playwright embarks on the production of a play about the city of Sevastopol and a Russian painter portraying Crimean War soldiers. Inspired by Tolstoy’s The Sevastopol Sketches, Emilio Fraia masterfully weaves together these stories of yearning and loss, obsession and madness, failure and the desire to persist, in a restrained manner reminiscent of Anton Chekhov, Roberto Bolaño, and Rachel Cusk (New Directions).