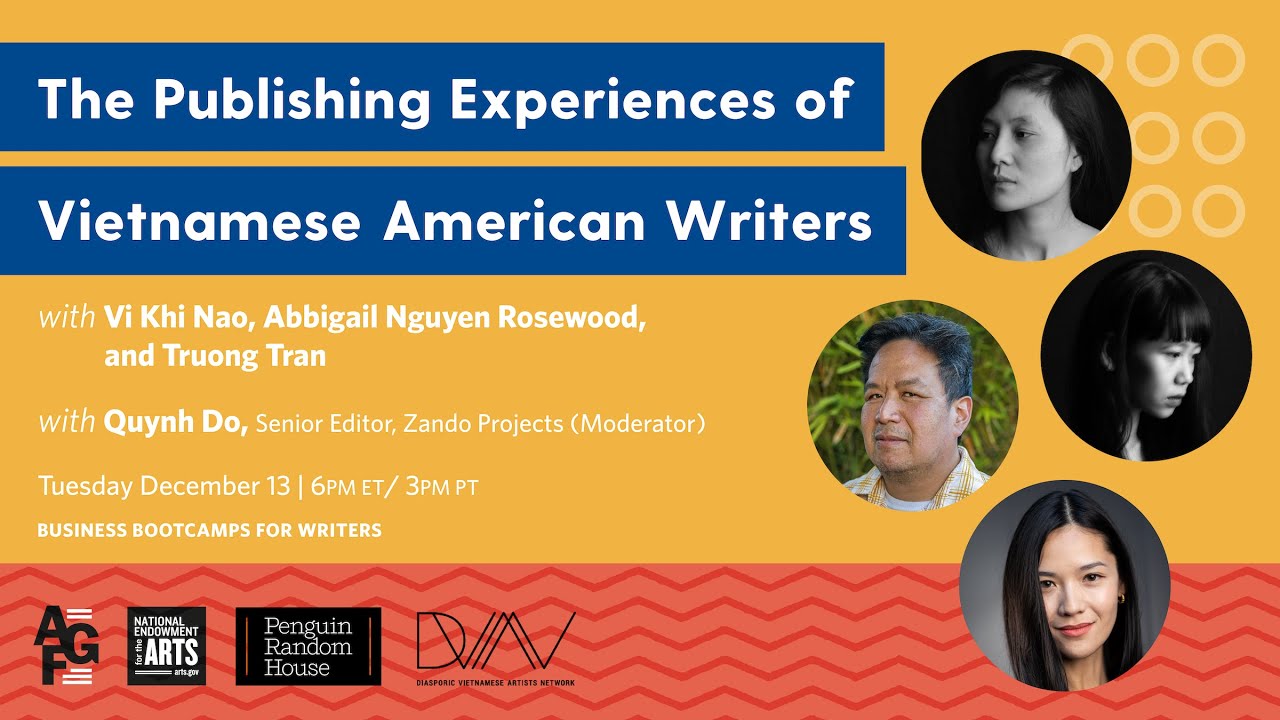 Writers from the Diasporic Vietnamese Artists Network (Vi Ki Nao, Abbigail Nguyen Rosewood, and Truong Tran) join us for a discussion moderated by editor Quynh Do. The panel will discuss the difficulties and challenges of being published as Vietnamese American writers, sharing stories about their experiences within publishing and how they have navigated the industry. They’ll be asked to reflect on the current moment: with the evolving literary landscape, is it getting easier to be published now, or is it still a double-edged sword to be a minority writer in North America?

Vi Khi Nao is the author of seven poetry collections & of the short stories collection, A Brief Alphabet of Torture (winner of the 2016 FC2’s Ronald Sukenick Innovative Fiction Prize), the novel, Swimming with Dead Stars. Her poetry collection, The Old Philosopher, won the Nightboat Books Prize for Poetry in 2014.  Her book Suicide: the Autoimmune Disorder of the Psyche will be out from 11:11 in Spring 2022. A recipient of the 2022 Jim Duggins, PhD Outstanding Mid-Career Novelist Prize, her work includes poetry, fiction, film and cross-genre collaboration. She was the Fall 2019 fellow at the Black Mountain Institute. Visit Vi at her website, on Twitter, on Instagram, and on Facebook.

Abbigail Nguyen Rosewood is a Vietnamese and American author. Her debut novel, If I Had Two Lives, is out from Europa Editions. Her second novel Constellations of Eve is the inaugural title available now from DVAN/TTUP, a publishing imprint founded by Isabelle Thuy Pelaud, a scholar of Asian American history and literature, and Pulitzer winner Viet Thanh Nguyen to promote Vietnamese American literature. Her works can be found at TIME Magazine, Harper’s Bazaar, Salon, Cosmopolitan, Lit Hub, Electric Lit, Catapult, Pen America, BOMB, among others. She is the founder of Neon Door, an immersive art exhibit. After having spent over 20 years in the U.S, she is now a reverse immigrant living in Ho Chi Minh, Vietnam with her husband and their daughter.

Truong Tran is a Vietnamese American writer born in Saigon, Vietnam. He is the author of 6 previous collections of poetry, The Book of Perceptions, Placing the Accents, Dust and Conscience, Within The Margins, Four Letter Words, 100 Words (Co-authored with Damon Potter). And most recently, Book Of The Other. His works have been translated into French, Dutch and Spanish. He is the recipient of The Poetry Center Prize, The Fund For Poetry  Grant, The California Arts Council Grant and numerous San Francisco Arts Commission Grants. He lives and works in the San Francisco Bay Area where teaches, makes art, and continues to write. Of his latest efforts, Book of The Other in 2022 was selected as CLMP’s Firecracker Prize in Poetry and the Before Columbus Foundation’s 2022 American Book Award. Tran states, Book of The Other is an endeavor that’s taken fifteen years of living, enduring, and writing.  It is not a book I wanted to write. It is a book I had to write.

Quynh Do is a senior editor at Zando, where she publishes serious and narrative nonfiction, as well as investigative journalism, memoir, essays, and select graphic nonfiction. Previously, she spent eight years at W. W. Norton and two years at Basic Books. She has edited and published titles such as Lydia Denworth’s Friendship, Hannah Fry’s Hello World, and Alberto Cairo’s How Charts Lie, and has worked with authors including Sheena Iyengar, Phil Plait, and Ayanna Howard. Her recent acquisitions include Dr. Ken Duckworth’s You Are Not Alone, published in partnership with the National Alliance on Mental Illness, and Dr. Rae Wynn-Grant’s Wild Life for Get Lifted Books, an imprint from John Legend. She has also served as lead nonfiction editor for award-winning literary magazine American Chordata. The daughter of Vietnamese refugees, she was raised in the American Midwest, educated at Yale University, and now lives in Brooklyn, NY.

Special thanks to DVAN for collaborating with the Authors Guild Foundation on this panel.

From Manuscript to Marketplace: Listen, World!

From Manuscript to Marketplace: Temple Folk

Serialized Fiction: How Authors Are Using The Format

Getting Published
View More
By continuing to browse or by clicking "Accept All Cookies," you agree to first- and third-party cookies being stored on your device to enhance navigation of our site, and to help us analyze our site traffic and personalize our content and ads.
Accept All Cookies
Manage consent