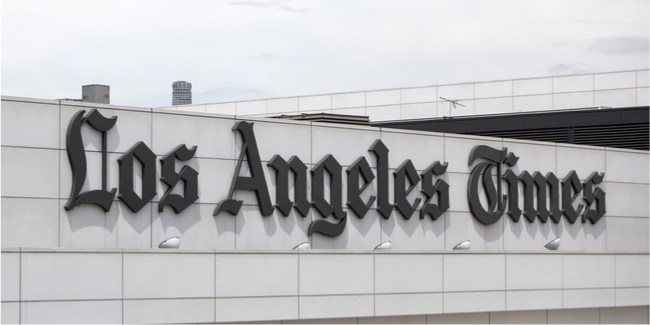 One of the nation’s leading newspapers is attempting an unprecedented rights grab, according to its writers. In the midst of contract negotiations with its newsroom staff, the Los Angeles Times, purchased last year by biotech billionaire Patrick Soon-Shiong, has proposed that its journalists, as a condition of employment, cede control of any books or other creative works made outside of their daily journalistic duties.

The Los Angeles Times Guild, a trade union representing some 400 newsroom staffers, has called the proposal “a new low in the newspaper industry,” pointing out that no other major newspaper has such strict copyright restrictions. “If we have a book idea related to our work,” according to the Times Guild, “the company wants unfettered power to claim control over whether it gets written, who owns the copyright and what we might get paid for it.”

We understand the pressures newspapers are under to meet the bottom line in today’s highly competitive media environment, but seeking to profit at the expense of employees’ independent creation is simply shameful. The law is well established that works created outside of the scope of employment are not “works made for hire,” and the rights to those works belong to their authors. It is particularly concerning coming from an industry leader, as other news media may be tempted to also make a grab for journalists’ book rights.

Journalists are already suffering. They have taken the brunt of the decline in newspapers’ revenue in recent years, with many losing their jobs due to newspaper closures and layoffs (the number of newspaper jobs has plummeted by a staggering 60% since 1990) and forced to work on a freelance basis for less pay and no benefits. Requiring that staff writers turn over rights to their books on top of this is an underhanded way of capitalizing on the difficult straits that so many truly great journalists find themselves in. The Los Angeles Times Guild has demonstrated the necessity in empowering journalists through collective bargaining, since individually journalists may not be able to refuse the LA Times predatory demands.

Without a doubt, many great books have been written by journalists based on stories they researched as reporters. But the research, writing, and—most of all—the expression that a writer puts into the work produced for a newspaper versus a book could not be more distinct, and the LA Times’s unreasonable conflation of the two and demand to seize rights conflicts with the most basic principles of copyright law. A newspaper has no more right to books by its journalists than it has over facts or ideas generally. Even worse, it raises serious free speech concerns for the newspaper to take control over what stories can be written as books.

“The LA Times must drop this egregious demand,” said Authors Guild president James Gleick. “A newspaper is meant to nurture its writers, not treat them as indentured servants. This ill-conceived power play is an assault on authorship.”