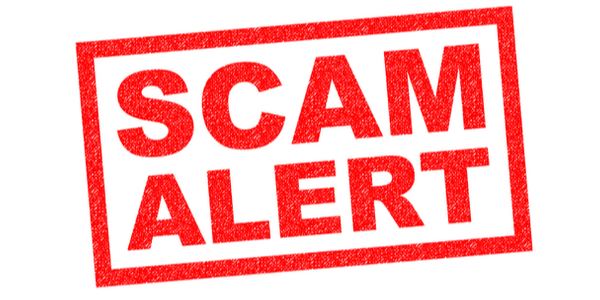 Online scams against authors are on the rise and becoming increasingly sophisticated. Nearly every day, we hear from authors who have been scammed or would have been had they not first reached out to the Authors Guild to confirm whether an “offer” was real. Authors must remain alert for these kinds of scams and be careful not to fall for them.

The first rule of thumb is that if someone solicits you out of the blue with an offer that seems too good to be true, it probably is.

Common types of scammer outreach include offers to get your book published by a well-known publisher, including a large advance—but then you find out that you must first pay a fee; you pay, and then you never hear from them again. Others make false promises to actively market your book and generate huge sales in exchange for an exorbitant fee. To engender trust, these scammers regularly mimic real companies, editors, and agents, often using names and email addresses that closely resemble a real company’s email to deceptively request manuscripts.

It is important to view any unsolicited offers to publish or market your books with caution. The Authors Guild has an ongoing list of reported scams below. If you encounter a potential scam that is not listed, please notify us so that we can investigate it. Even simple Google searches will unearth reports of particular scams.

Is it a Publishing Scam? Rules to Keep in Mind

If you learn about any efforts to defraud authors, please contact the Authors Guild to let us know so that we can better protect our members. In addition, Writers Beware is an excellent resource for looking into potential scams in the marketplace. Penguin has also recently launched their own fraud alert page.

Silver Ink Literary Agency, which also solicits authors as Silver Literary Agency and Global Review Press, falsely alleges partnership with top publishers (and sometimes with the Authors Guild) and promises publication with the proclaimed partners if you provide a “contributor’s fee” of several thousand dollars or purchase other purported services. No legitimate literary agent will ever charge such a fee. Silver Ink recently has altered its initial approach by substituting specific publisher names with replacement terms like “traditional American publisher” and in some cases no longer mentions guaranteed publishing in their initial outreach.

Some authors have been approached by unknown parties and asked for copies of their unpublished manuscripts. The purpose of gathering these manuscripts is unclear.

Phishing Scams Claiming to Be from Hachette

Hachette Book Group (HBG) has also advised us about similar, targeted efforts that employ sophisticated schemes to obtain manuscripts and other information from Hachette’s employees, authors, and associates:

“We are continuing to see attempts to impersonate HBG staff, authors, and agents to obtain both manuscripts and financial information from our authors and employees. These latest attempts include additional use of impersonated domain names similar to our actual company domains (addresses using hgbusa.com rather than hbgusa.com), in an attempt to create confusion or take advantage of anyone who doesn’t notice these details.

The hackers continue to use industry jargon and insider terms and information to enhance the appearance that their emails are legitimate. There is also evidence to suggest that the hackers are conducting ‘man in the middle’ attacks, where they contact two parties fraudulently (for example, an editor and an author) and impersonate each to the other.”

Translation Solicitation Scam Claiming to Be from Hachette

HBG has also warned us about a phishing effort to solicit free work, alerting us that someone had apparently impersonated one of their editors-in-chief to commission a reader’s report for a recently published foreign language novel; the reader provided the report but was not paid. Please keep an eye out for similar scams soliciting work.

Scams Claiming to Be from Penguin Random House

Authors have additionally received emails in the past claiming to be from Penguin Random House (PRH), but have found an assumed “m” to be a deceptively arranged “rn” upon closer inspection. PRH is constructing a fraud alert website to notify authors of known scams and provide dedicated telephone and email support through which authors can verify whether PRH has indeed originated any purported offers.

Scams Claiming to Be from Macmillan

Recently, some authors have received a document entitled “Book Endorsement” purporting to be from Macmillan. It states that a book “has been picked for procurement of rights” and guarantees the author a minimum of $700,000. But the author must first pay the “literary agent” a fee of, say, $3,000. The email on the form is a fake one—macmillanpublishersnewyork.com.

Macmillan has posted the following warning on its website:

“Please be aware that fictitious solicitations purporting to be ‘Letter(s) of Interest,’ job openings, and/or requests for payment are occasionally circulated online by individuals posing as Macmillan representatives. Macmillan does not solicit agents, authors, or job candidates in this manner. If you have any doubts about the authenticity of a communication purportedly from or on behalf of Macmillan, please email compliance@macmillan.com before taking any action.”

Truman Publishing has been reported to us as a possible scam by multiple members. Based on a review of its website, we suspect that may be the case and will continue to investigate.

Publishers That Have Failed To Pay Authors

We also keep track of publishers that have failed to pay on time or in full or have become non-responsive. Click here to read that list.